1. Payouts to ryots from this month itself

Context: According to the Finance Ministry the government will start disbursing a substantial amount under the income support scheme for small farmers in the month of February itself as beneficiary data are already in place.

Pradhan Mantri Kisan Samman Nidhi (PM-KISAN) Scheme, under which Rs.6,000 per year would be provided to farmers holding cultivable land of up to 2 hectare was recently announced in the interim budget.

This programme would not only provide assured supplemental income to the most vulnerable farmer families, but would also meet their emergent needs especially before the harvest season. It would pave the way for the farmers to earn and live a respectable living.

2. Kerala catching up with superfoods

The Kerala government moves to expand the Millet Village scheme.

Context: The CBI is ready to move the Supreme Court against the West Bengal government and its police for impeding an ongoing court-ordered investigation into multi-crore chit fund cases, including the Saradha scam.

Context: The U.S recently pulled out from the Intermediate Range Nuclear Forces Treaty with Russia. 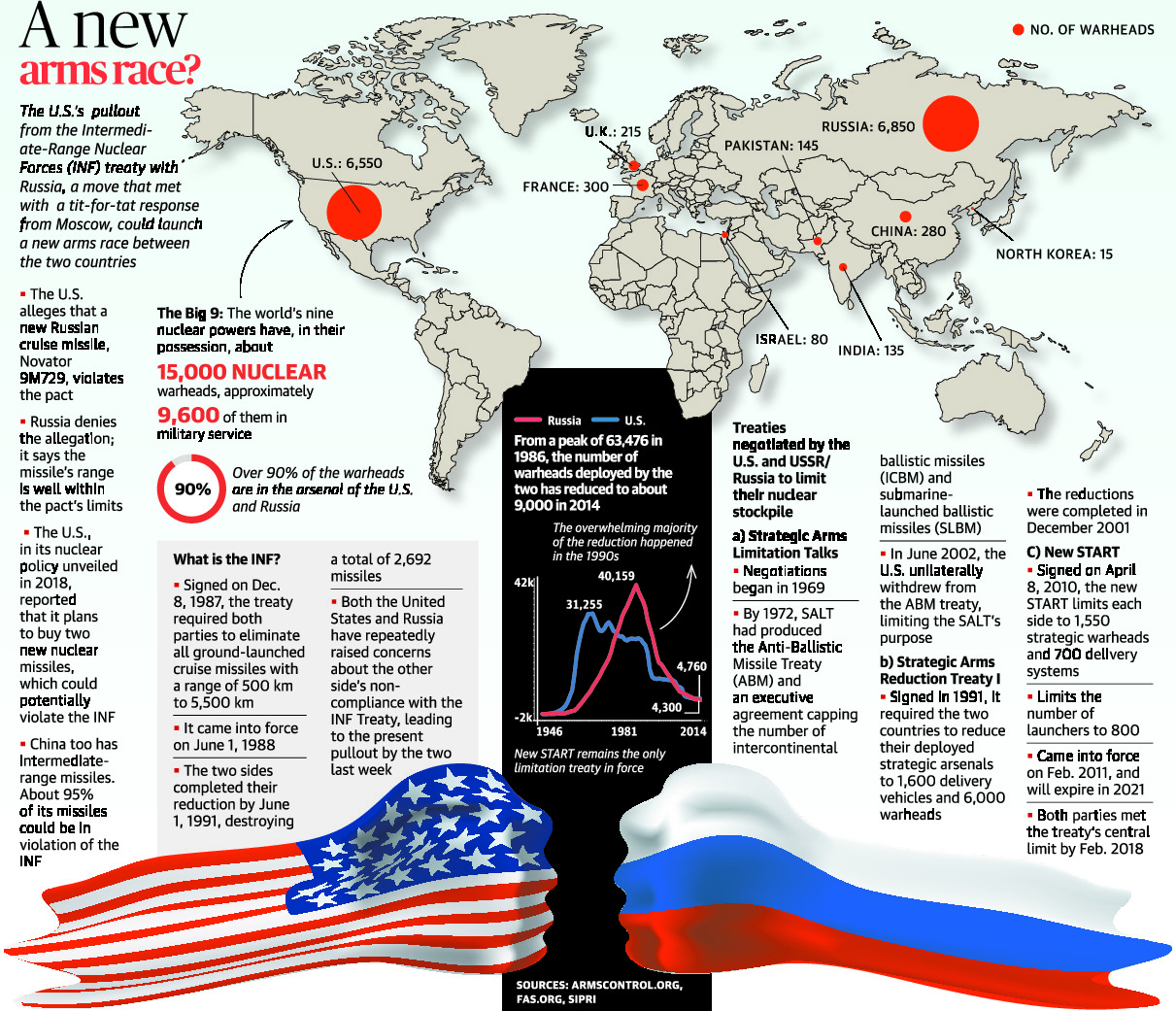 Context: Integrated Tribal Development Authority (ITDA) of Andhra Pradesh is planning to enforce a prohibition on the sale of plastic water sachets at tourist spots.

According to officials, water sachets amount to around 40%-50% of the total plastic waste dumped at the tourist destinations.

These sachets are inadvertently consumed by stray cattle, putting their lives at risk, apart from environment pollution.

Harmful effects of Plastic on:

Context: A ‘pink revolution’ is quietly taking shape in Maharashtra with an objective to breed imported pigs to address the problem of protein deficiency in a sizeable section of the population that has been deprived of access to affordable meat besides providing livelihood to farmers.

Many consumers stay away from consuming pork as local pigs are mostly bred under unhygienic conditions.

National Statistical Commission’s (NSC) acting chief PC Mohanan and member JV Meenakshi – he two non-official members have resigned over “disagreements” with the government over the release of a jobs survey.

Delay in releasing key employment data has undermined the credibility of data officialdom. The government should ensure that the data must not be withheld and India’s statistical integrity must not be invalidated.

2. Legitimacy of the basic structure – On Basic Structure of India’s Constitution

There have been protests over the rule’s legitimacy in certain quarters in response to challenges made to the recently introduced 103rd Constitutional Amendment, which provides for reservations based on economic criteria in government jobs and education. The Act amends Articles 15 and 16 of the Constitution, by adding a clause which allows states to make “special provision for the advancement of any economically weaker sections of citizens.

Basic Structure of the Constitution:

It has now been more than 45 years since the Supreme Court ruled in Kesavananda Bharati v. State of Kerala that Parliament’s power to amend the Constitution was not unlimited, that the Constitution’s basic structure was inviolable. But as entrenched as this doctrine might now be, it remains, to some, a source of endless aversion.

Were an amendment to be introduced relinquishing control over India to a foreign power, would it not result in the creation of a constitution that is no longer the Constitution of India? Would not such an amendment strike at the root of the Constitution’s Preamble, which, in its original form, established India as a sovereign democratic republic?

On any reasonable analysis it ought to, therefore, be clear that the basic structure doctrine is not only grounded in the Constitution’s text and history, but that it also performs an important democratic role in ensuring that majoritarian governments do not destroy the Constitution’s essential character.

The basic structure doctrine has been applied by the judges every now and then. It has till date proved to be a very effective tool in deciding the validity of the constitutional amendments. The doctrine, however, had not yet been defined in any of the judgements adequately and sufficiently. There are many things which are basic to the constitution and they cannot be decided beforehand. While the idea that there is such a thing as a basic structure to the Constitution is well established its contents cannot be completely determined with any measure of finality until a judgement of the Supreme Court spells it out. Nevertheless the sovereign, democratic and secular character of the polity, rule of law, independence of the judiciary, fundamental rights of citizens etc. are some of the essential features of the Constitution that have appeared time and again in the apex court’s pronouncements.

The United States and Russia suspended a crucial nuclear weapons treaty, a move that has sparked concerns of a budding arms race between the world’s two biggest nuclear powers. Citing Russian non-compliance, U.S. President Donald Trump announced on 20 October 2018 that he was withdrawing the U.S. from the treaty. The U.S. formally suspended the treaty on 1 February 2019, as did Russia the following day.

How was the INF Treaty helpful?

The INF Treaty itself consisted of three parts: a Memorandum of Understanding on Data, a Protocol on Inspections, and a Protocol on Elimination.

The treaty was a product of its time – and times change. Nevertheless, in pulling out of the INF, USA is effectively throwing away leverage it may have had with Russia on an issue of global concern.

1. Retracing their roots to Southeast Asia

Context: About 400 people would be travelling to Thailand to retrace their cultural roots and also promote trade and tourism, at a first-of-its-kind event in Bangkok on February 9 and 10.

Many communities in the northeast, such as the Ahoms and the Shyams in Assam, had migrated from the Thailand-South China-Myanmar region centuries ago.

Apart from meetings on trade and investment, the focus is on cultural exchanges.

Aimed at bridging ties between India’s northeastern region and Southeast Asia, this initiative, is based on historic links snapped by political boundaries.

Harmful effects of Plastic on:

Judicial review is the power of courts to decide the validity of acts of the legislative and executive branches of government. If the courts decide that a legislative act is unconstitutional, it is nullified. The decisions of the executive and administrative agencies can also be overruled by the courts as not conforming to the law or the Constitution. The Indian Constitution does not explicitly mention judicial review.