Pegasus spyware is malicious software that is designed to enter a device, gather your data, and then forward it to a third party without the consent of the user.

Latest Update: The Pegasus snooping controversy led to multiple disruptions in the Lok Sabha in the monsoon session 2021 of the parliament. 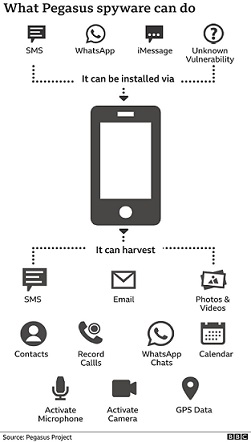 How can one detect the Pegasus Spyware?

Researchers at Amnesty International have developed a tool to see whether your phone is targeted by spyware. The tool is called Mobile Verification Toolkit (MVT), the tool is aimed to help you identify if the Pegasus spyware has targeted your phone. It works with both Android and iOS devices.

NSO’s Stand on the Issue

Providing as much information on the Pegasus Spyware to software and security vendors can help to fix the vulnerabilities exploited by the attackers. The governments must take measures such that Spyware is not misused by political parties and intelligence institutions.

How does Pegasus spyware get on your phone?

Zero-click exploits use bugs in popular apps like iMessage, FaceTime and WhatsApp. Pegasus can infiltrate a device using the protocol of the app once bugs are found.