Rajya Sabha TV programs like ‘The Big Picture’, ‘In Depth’ and ‘India’s World’ are informative programs that are important for UPSC preparation. In this article, you can read about the discussions held in the ‘Big Picture’ episode on “Article 131- Special Powers of Supreme Court” for the IAS exam. 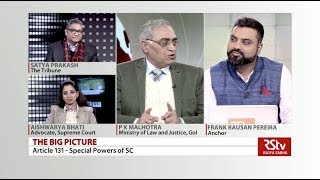 Article 131: The original jurisdiction of the Supreme court

Rights of States and the Centre:

India has a federal form of government wherein the powers are divided between the States and the Centre.

However, the Parliament can make laws on subjects listed under the State List when a resolution is passed to that effect by the Rajya Sabha under Article 249.

Can States oppose the implementation of a Central Law under Article 131?

Can the states file an original suit under Article 131? – Related cases

Can the Supreme Court test the validity of a central law under Article 131?

A central law can be challenged under Article 131 under the following cases: