The T90 Bhishma is an Indian variant of the Russian T90S tank. It is tailored specifically for Indian terrain with assistance from Russia and France. With the exception of a few components, it is similar to the T90 line of main battle tanks

Hence most of the information given about the T90 Bhishma will be of the non-export model.

Brief History of the T90 Bhishma

India purchased about 310 T-90S tanks from Russia. Out of these, 124 of them were delivered in their entirety while the remaining 186 were to be assembled in Indian domestic plants. The objective was to begin domestic production.

The T-90 was selected by the Indian defence establishment because it was a direct successor of the T-72. In fact, the T-72s used in India had most of its parts produced domestically. At least 60% of the T-72 parts had much in common with the T-90. This made service and training of new crews an easy task.

It includes lethal armor-piercing fin-stabilized discarding sabot (APFSDS) and barrel launched Refleks anti-tank guided missiles. On the other hand, the T-90M tanks have a more versatile main armament and can fire several different types of munitions.

What’s more, India was keen to purchase the T-90s because of delays in the production of the domestically produced Arjun main battle tank as well as a counter to Ukrainian-made T-80 tanks deployed by Pakistan.

By 2021, the Indian Army had sought to upgrade its existing fleet of T-90s with locally designed modular Activation Protection, with soft and hard targeting kill system, thus updating these tanks to fit modern standards. 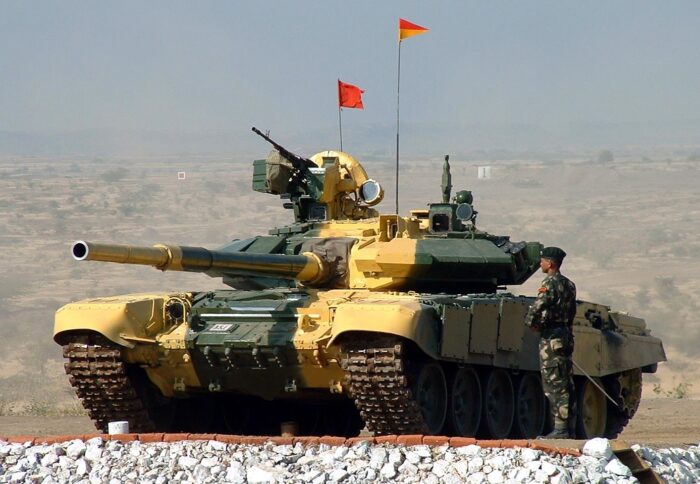 The general characteristics of the T90 tanks are given in the table below:

Variants of the T90 Tanks:

T-90M – Latest version of the T-90A. The main features include the modernisation of the old turret design, which is equipped with the new advanced fire control system “Kalina” (with integrated combat information and control systems), improved armor on the ammo carousel, and a new upgraded gun 2A46M-5, as well as a remote-controlled anti-aircraft gun “UDP T05BV-1”.

T-90S – Export version of the T-90, later adopted by the Russian Armed Forces as the T-90A. These tanks were made by Uralvagonzavod and were updated with 1,000 hp (750 kW) engines made by the Chelyabinsk Tractor Plant.

T-90S “Bhishma” – Modified T-90S in Indian service. India announced that they will be made in India until 2028

What are Main Battle Tanks?

How does the T90 Bhishma fare against other tanks?

T-90 Bhishma, originally made in Russia, is among the most powerful tanks in the world. The tank was designed by Kartsev-Venediktov and manufactured by Uralvagonzavod, Heavy Vehicles Factory. The tank is operated by Algeria, Armenia, Azerbaijan, India, Iraq, Russia, and more.

What is the cost of a T90 Bhishma tank?

This comes after the cabinet committee on security cleared the license acquisition from Russia over a month ago. The Indian Army will induct additional 464 Russian-origin upgraded T-90 ‘Bhishma’ main battle-tanks at a cost of Rs 13,448 crore.

A distinctive feature often associated with the T-90 family tanks are “glowing eyes” on the turret. These “eyes” are the electro-optical interference emitters of the Shtora-1 active protection system, intended to disrupt the guidance systems of anti-tank guided missiles (ATGMs).