Difference between between Sea and Ocean

Difference between Sea and Ocean is explained here in detail.

An ocean is a body of water that composes much of a planet’s hydrosphere. The ocean contains the majority of Earth’s water. Oceans influence weather and climate patterns.

For information on IAS Exam dates, structure and other details aspirants can visit the given link. 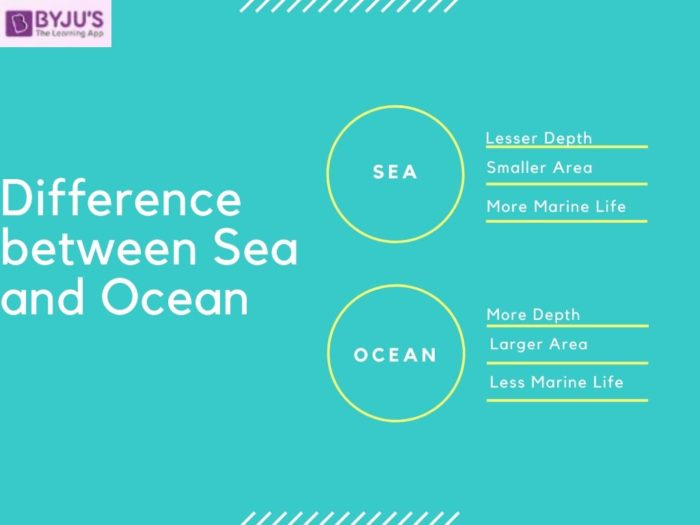 What is the Sea?

The expanse of saltwater that covers most of the Earth’s surface and surrounds its land masses is called the Sea. Sea is that part of the ocean that is partially surrounded by land. However, there are cases where the sea is completely landlocked, for example, The Caspian Sea.

What is the Ocean?

An ocean is a body of water that composes much of a planet’s hydrosphere. Over 70% of Earth’s surface is covered with oceans. There are five oceans in the world, the Pacific ocean, Atlantic ocean, the Arctic ocean, the Indian ocean and the Antarctic ocean.

Difference Between Sea and Ocean

The major differences between Sea and Ocean are:

After understanding differences between Sea and Ocean, visit the below given NCERT links for information on the other aspects of Oceans along with other related topics.

Frequently Asked Questions on Difference Between Sea and Ocean

Q 1. What is the main difference between ocean and sea?

Ans. Sea is also made up of salty water but is smaller in size compared to oceans.

Q 2. What type of water do ocean bodies and seas contain?

Q 3. What is the significance of the Sea and Oceans?

Ans. Given below are the benefits of Seas and Oceans:

Ans. A Sea is said to be a smaller part of the Ocean. All seas are found in areas where the ocean and land meet.

For a thorough understanding of the syllabus of Civil Services Exam, visit the given link UPSC Syllabus.