Characteristics of the Lion-Tailed Macaque

Lion-tailed macaques have black hair. It is easily recognised by its silver-white mane that surrounds the head from the cheeks down to its chin. Its face has no hair and is black in colour. Head to body length is about 61 cm and weighs about upto 10 kg, making it one of the smallest among the macaques species. The black tuft is more prominent in males than females with the tail being about 25 cm in length.

The life expectancy for a wild lion-tailed macaque is 20 years while it is 30 years in captivity.

Behaviour of the Lion-Tailed Macaque

The lion-tailed macaque is diurnal in nature, as in being active solely during daylight hours. Preferring rainforest environments it is a good climber , spending most of its time in the upper reaches of a tropical rainforest. Its habitats consist of rainforest regions of Karnataka, Kerala and Tamil Nadu.

Unlike other macaques, lion-tails avoid humans as much as possible. They form hierarchical groups of about 20 members. These groups fiercely defend their territories with loud cries and if necessary, brawling aggressively.

The diet of the lion-tailed macaque consists of fruits, leaves, buds, and insects. However, they diversify their diets in the event of environmental change or scarcity. They are also known to feed on fruits seeds, shoos, flowers and other parts of non indegenous plants. 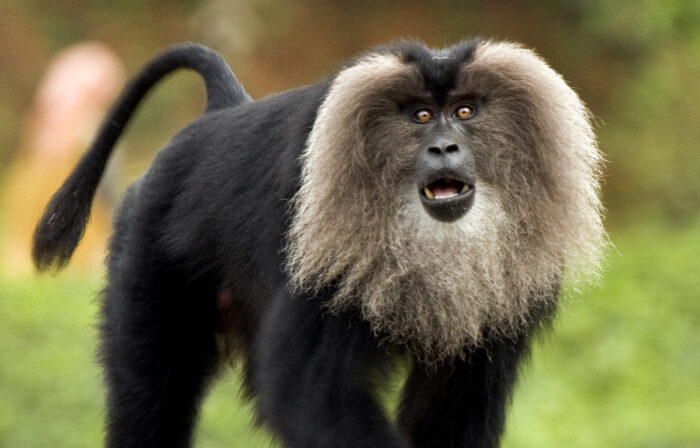 As per the assessment carried out by the International Unit for Conservation of Nature (IUCN) it was reported that 3000-3500 of the lion-tailed macaque population was dispersed in Kerala, Tamil Nadu and Karnataka. Its red list categories it as ‘endangered ‘.

Their population range is becoming significantly limited due to spread of agriculture and commercial farming for tea, coffee. Construction of new dams and irrigational facilities are also a factor in their decline.

Despite conservation efforts, habitat loss remains the key component in their population decline.

What are the other sanctuaries of the Lion-Tailed macaque?

Some of the sanctuaries for lion-tailed macaque are as follows:

What are the additional threats to the lion-tailed macaque?

Along with habitat destruction, people hunt lion-tailed macaques for their meat and for illegal trade, despite the fact that they are an endangered species.

What are the adaptive features of Lion-tailed macaque?

The lion-tailed macaques are well-adapted to their environment. Their silver manes help keep off the rain during monsoons, and their cheek pouches allow them to collect a lot of food quickly and avoid predators. In addition, they have opposable thumbs, which aid in foraging as well.