On 21 September 1857, the last Mughal Emperor Bahadur Shah Zafar surrendered to Major William Hodson of the British East India Company’s Army. Bahadur Shah was the rallying point for the sepoys in the Revolt of 1857, and the war was fought in his name as the ‘Emperor of India’. Read more about this important event in modern Indian history for the IAS exam. 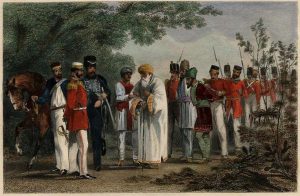 How did Mughal Rule End?

What led to the End of the Mughal Empire?

The Mughal Empire was in terminal decline since the rise of the Maratha Empire and Sikh Empire. Moreover, internal corruption and costly wars had drained the imperial treasury The killing blow came when following the crushing defeat during the 1857 revolt, Bahadur Shah Zafar, was deposed by the British East India Company and exiled in 1858.

Who was the last effective ruler of the Mughal Empire?

What additional factors led to the decline of the Mughal Empire?