The Mughal Empire declined rapidly after the death of Aurangzeb in c. 1707 CE. This year is generally considered the differentiating year to separate the era of the Great Mughals from that of the lesser Mughals, also known as the Later Mughals. In this article, you can read all about the later Mughals and also about the decline of the Mughal Empire. This is an important topic for the UPSC exam history segment. 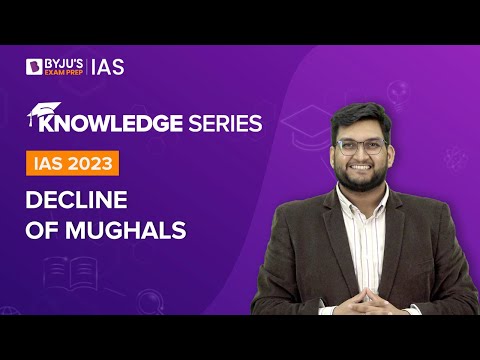 The period between c. 1707 CE and c. 1761 CE (the time of Aurangzeb’s death to the period when the Third Battle of Panipat took place, wherein Ahmad Shah Abdali defeated the Maratha chiefs), witnessed the resurgence of regional identities and highlighted a sad state of affairs for the once-mighty Mughals. The Mughal court became the scene of factions among the nobles. The weakness of the empire was exposed when Nadir Shah imprisoned the Mughal Emperor and looted Delhi in c. 1739 CE.
After the death of Aurangzeb in c. 1707 CE, a war of succession broke out among his three sons – Muazzam (the governor of Kabul), Muhammad Kam Baksh (the governor of Deccan) and Muhammad Azam Shah (the governor of Gujarat). Muazzam emerged victorious and ascended the throne with the title of Bahadur Shah Ⅰ.

Muazzam ascended the throne and assumed the title of Bahadur Shah, at the age of 63.

After the death of Bahadur Shah, a new form of politics emerged in the Mughals’ political sphere wherein the nobles became ‘king makers’ and the kings mere ‘puppets’ in their hands. Jahandar Shah was the first puppet ruler in Mughal India. He was supported by Zulfiqar Khan (wazir) who had the reins of the executive in his hands.

Brother of Jahan Shah who was fond of dancing and was himself an expert Kathak dancer.

Nadir Shah was the Emperor of Iran. He was a national hero there who drove the Afghans out of Iran.

He was the second son of Jahandar Shah and was raised to the throne by Imad-ul-Mulk after he deposed Ahmad Shah.

During his reign, the Mughal power was so depleted that it led to a saying in Persian “Sultanat-e-Shah Alam, Az Dili ta Palam”, meaning “The kingdom of Shah Alam is from Delhi to Palam,” Palam being a suburb of Delhi.

He was the son of Shah Alam Ⅱ  and remained only under British protection as in c. 1803 CE, the British had captured Delhi.

He was the last ruler of the Mughal Empire. He was an accomplished poet and his pen name was Zafar (victory).

The decline and downfall of the empire was due to economic, social, political and institutional factors:

Rise of Regional Powers and States

The decline of the Mughal authority gave rise to the emergence of a number of independent kingdoms. The later Mughal rulers were not in a position to militarily enforce its regulations in all parts of the empires; as a result, many provincial governors started to assert their authority. In due course of time, they gained independent status. At the same time, many kingdoms which were subjugated by the Mughals also claimed their independence. Some new regional groups also consolidated and emerged as political powers. The states that arose in India during the decline of the Mughal empire and the following century (between c. 1700 – 1850 CE) varied greatly in terms of resources, longevity and essential character. Some of them – such as Hyderabad had been in a region where there had been an older regional tradition of provincial states in the immediate pre-Mughal period too, whereas many of the other post-Mughal states were based on either ethnic or sectarian groupings – the Marathas, the Jats and the Sikhs.