This article will help the candidates get an idea about the reign of the successors of Akbar – Jahangir, Shah Jahan, Aurangzeb and so on.

The information from this article will be useful in the IAS Exam.

Akbar was succeeded by his son Jahangir after his death. In this section, we will learn all about Akbar’s successors and their rule of the kingdom.

Salim was the eldest son of Jodha Bai and Akbar, who succeeded to the throne in c.1605 CE, after the death of Akbar. He assumed the title of Nur-ud-din Muhammad Jahangir (conqueror of the world).

After the death of Jahangir in c. 1627 CE, Shah Jahan reached Agra and with the support of the nobles, chief Diwan Asaf Khan, and the army, Shah Jahan ascended the throne. Nur Jahan was given a pension and lived a retired life till her death 18 years later, and was buried at Lahore.

Shah Jahan ascended the throne in c.1628 CE at Agra. His mother was a Hindu Jagat Gosain. He was married to Arjmand Banu Begum (Mumtaz Mahal).

Aurangzeb was one of the ablest of the Mughal kings. He assumed the title “Alamgir” (world conqueror). Aurangzeb ruled for almost 50 years and during his long reign, the Mughal empire reached its territorial climax. It stretched from Kashmir in the north to Jingi in the south, and from Hindukush in the west to Chittagong in the east.

Economic and Social life under the Mughals

During the Mughal rule, many European travellers and traders came to India and their accounts contain valuable information regarding the social and economic conditions of India. In general, they described the wealth and prosperity of India and also the luxurious life of the aristocratic class. On the other side, they also mentioned the poverty and sufferings of the ordinary masses like artisans and peasants. Nikitin observed that the people of the Deccan were bare-footed, possibly due to the high cost of leather. The nobles of the Mughal period formed a privileged class. Most of them were foreigners such as Turks and Afghans and got readily assimilated into the Indian society and culture.

Also read: India under the Mughals 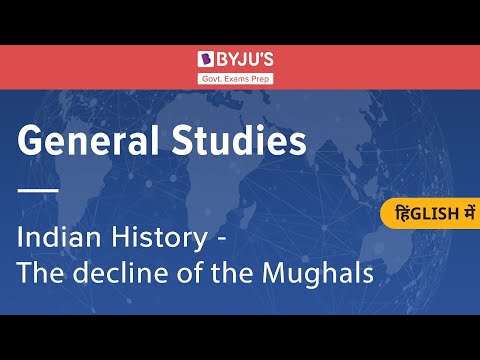 Under which Mughal Emperor did the empire begin to break up?

During the reign of Muhammad Shah, the empire began to break up, and vast tracts of central India passed from Mughal to Maratha hands.

When did the Mughal Empire reach its greatest territorial extent?

Aurangzeb expanded the empire to include a huge part of South Asia. At its peak, the kingdom stretched to 3.2 million square kilometres, including parts of what are now India, Pakistan, Afghanistan and Bangladesh.