The government informed the Parliament that the National Crime Record Bureau (NCRB) will for the first time collect gender disaggregated data on sexual assaults against children.

14 more rebel MLAS have been disqualified by the Karnataka Assembly Speaker K.R. Ramesh Kumar, bringing the total of disqualified MLAs 17 – till the end of the Assembly term.

Legislators may be disqualified on following grounds:

Exceptions under the law:

3. ‘Vishaka rules must apply to judiciary’

Former chief justice of Delhi High Court, Justice A.P. Shah has asserted that there is a need to engage in how the Vishaka guidelines, which deal with sexual harassment in the workplace, should be made applicable to the judiciary.

Australia is leading diplomats from various countries involved in the negotiations for the 16-member Regional Comprehensive Economic Partnership (RCEP) free trade agreement to convince India to commit to the deal by the end of the year.

Why does RCEP matter for the world?

Why has it taken so long to negotiate RCEP?

What are India’s concerns? 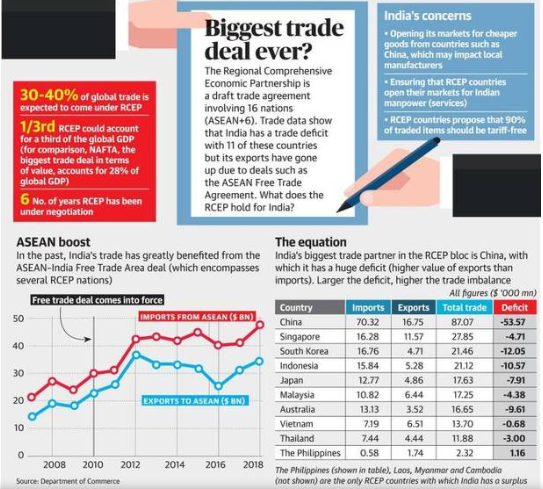 The Himalayan States came together at a conclave here to demand a separate Ministry to deal with problems endemic to them and a green bonus in recognition of their contribution to environment conservation.

After deliberations which, a “Mussorie resolution” was passed at the conclave making a collective pledge to conserve and protect their rich cultural heritage, bio-diversity, glaciers, lakes, besides making their own contribution to the nation’s prosperity.

Surrogacy (Regulation) Bill, 2019 was recently approved by the Cabinet, after having lapsed in December 2018 with the dissolution of Parliament.

1. Ban or regulate? – On Cryptocurrencies

An inter-ministerial committee set up in November 2, 2017, headed by Finance Secretary Subhash Chandra Garg  submitted its report on legality of cryptocurrencies and blockchain to the Finance Ministry. The committee recommended that private cryptocurrencies be banned completely in India, while advocating a central bank-issued cryptocurrency.

A cryptocurrency (or crypto currency) is a digital asset designed to work as a medium of exchange that uses strong cryptography to secure financial transactions, control the creation of additional units, and verify the transfer of assets.

What are the problems with cryptocurrencies?

Is banning cryptocurrencies is the most effective way to respond?

Considering this example it can be understood that an outright ban is not necessarily a superior choice to regulation, especially in a field driven by fast-paced technological innovations.

1. History and the 5G dilemma

PUNCH (Polarimeter to Unify the Corona and Heliosphere) is focused on understanding the transition of particles from the Sun’s outer corona to the solar wind that fills interplanetary space. PUNCH will consist of a ‘constellation’ of four suitcase-sized microsats that will orbit the Earth in formation and study how the corona, which is the atmosphere of the Sun, connects with the interplanetary medium. The mission is expected to be launched in 2022.[/su_spoiler]

Uranus has five major moons: Miranda, Ariel, Umbriel, Titania, and Oberon. They range in diameter from 472 km for Miranda to 1578 km for Titania.[/su_spoiler]

Mandamus is a judicial writ issued as a command to an inferior court or ordering a person to perform a public or statutory duty.   This writ is a command issued by court to a public official, public body, corporation, inferior court, tribunal or government asking them to perform.[/su_spoiler]