The UPSC civil services prelims went on as expected on 18th June 2017. The IAS Prelims consists of two papers namely the General Studies Paper I and the General Studies Paper II (more commonly known as the CSAT). The CSAT paper is qualifying in nature with candidates requiring to score a minimum of 33%. The GS paper I is the one which determines your eligibility to sit for the UPSC mains exam, based on a cut-off mark set by the UPSC.

General consensus was that the GS paper I of 2017 Prelims was tougher than last year’s. This is, of course, a very subjective matter. What is tough for one person might not be so for another. However, BYJU’S analysis based on expert opinion and opinions of many who took the UPSC prelims 2017 is that the paper was a bit tough when compared to the 2016 GS paper I.

Let us look at a detailed analysis of the questions asked in the 2017 GS Paper I – the subjects and the difficulty levels through graphs. 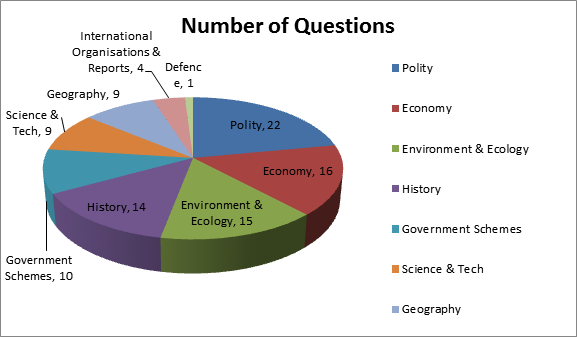 As you can see, the maximum number of questions was asked from the polity. The economy was second in precedence with 16 questions being asked from that topic. Government schemes is a topic whose prominence for UPSC is increasing every year and this year, 10 questions came from it.

The next graph would reveal the difficulty level of the questions. This is indeed subjective but BYJU’S analysis is based on broad expert faculty opinion. 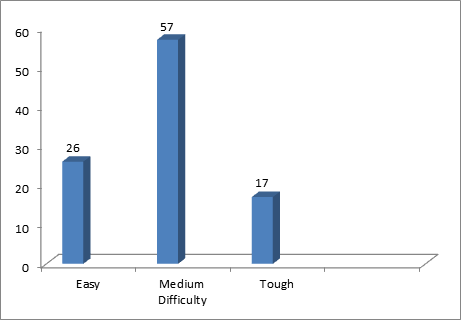 Maximum questions could be labelled as being of a medium difficulty level. 17 questions were very tough whereas 26 were relatively easy in nature.

Now, let us look at the subject-wise difficulty level of the questions asked in UPSC Prelims 2017.

Now, let us come to another part which is perhaps the most discussed aspect of the UPSC prelims paper – the static versus dynamic questions. The following graph would reveal that most questions were static, some were dynamic and a few were a mix of both static and dynamic portions in the exam. 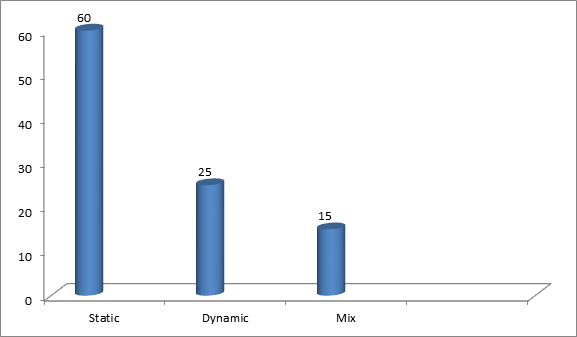 We hope the above graphs would help you understand the nature of the UPSC prelims GS Paper I.  With the correct strategy and guidance, you can clear the UPSC civil services and make a satisfying career in the Indian civil services.

Do you know if you are eligible for the IAS Exam? Check the detailed UPSC Eligibility Criteria at the linked article.