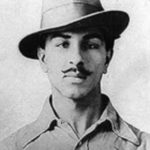 Bhagat Singh was born into a Sikh family in 1907 in Lyallpur District, present-day Pakistan.

Although there have been many leaders from the revolutionary mould, Bhagat Singh’s name is always first quoted when talking about revolutionary freedom fighters of India.

Bhagat Singh was arrested and charged in the Saunders murder case, along with Rajguru, Sukhdev and others.

Bhagat Singh’s many quotes are famous and some of them can be used in the UPSC Mains exam.

What is Bhagat Singh known for?

Bhagat Singh was a hero of the early 20th-century Indian independence movement. He was a vocal critic of British rule in India and was involved in two high-profile attacks on British authorities—one on a local police chief and the other on the Central Legislative Assembly in Delhi.

What is the legacy of Bhagat Singh?

The youth of India still draw tremendous amount of inspiration from Singh. He was voted the “Greatest Indian” in a poll by the Indian magazine India Today in 2008, ahead of Bose and Gandhi. During the centenary of his birth, a group of intellectuals set up an institution named Bhagat Singh Sansthan to commemorate him and his ideals. The Parliament of India paid tributes and observed silence as a mark of respect in memory of Singh on 23 March 2001 and 2005.