About Rowlatt Act – The Rowlatt Act was passed by the British government to increase their grip on power over the common folk. This law was passed in March 1919 by the Imperial Legislative Council which gave them the power to arrest any person without any trial. To abolish this act, Gandhi and the other leaders called for a Hartal (suspension of work) to show Indians’ objection to this rule, called the Rowlatt Satyagraha.

Both the topics, ‘Rowlatt Act’ and ‘Jallianwala Bagh Massacre’ are important for IAS Exam from the perspective of the Modern History syllabus.

Aspirants can read similar articles linked in the table below:

A cursory detail of the act is given in the table below: 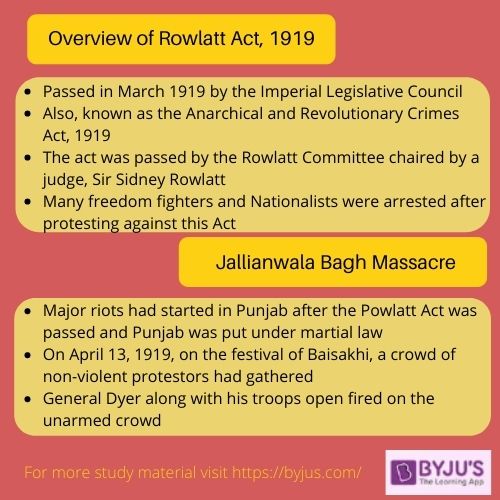 What is the Rowlatt Act?

The basic facts about the act and its significance are given below:

What is the story of the Jallianwala Bagh Massacre?

Both topics are important for UPSC  and other government exams as modern Indian history makes one of the most important subjects for the exams.

Also, get updated with the latest UPSC Syllabus for the upcoming Civil Services Exam at the linked article and start your IAS preparation accordingly.

Get Modern Indian History notes for UPSC preparation in the linked article.