Difference between Empire and Kingdom

The terms ‘empire’ and ‘kingdom’ are used interchangeably quite often. But they both have key differences between them.

For starters, an empire is a collection of different countries ruled by an emperor/empress while a kingdom may consist of a single domain or more which is ruled by a king or a queen. 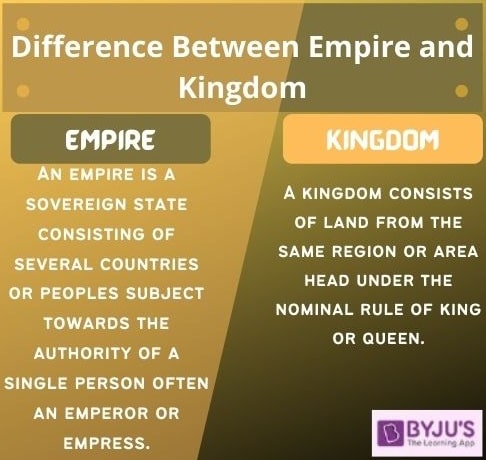 Empire vs Kingdom – Points of Difference

Difference between Empire and Kingdom

For further readings candidates can refer to the following articles:

How are empires different from kingdoms?

An empire is a sovereign state made up of many countries or cultures that are ruled by a single individual, usually an emperor or empress. A kingdom is made up of land from the same region or territory that is ruled by a king or queen.

Who is an emperor?

An emperor is a monarch, and usually the sovereign ruler of an empire or another type of imperial realm. Emperors are generally recognized to be of the highest monarchic honour and rank, surpassing kings.