Longitudinal Division of the Himalayas

The Longitudinal Division of the Himalayas is an important segment in the IAS Geography syllabus of the UPSC civil services exam.

The Himalayas, the abode to the highest peaks on the earth, are incredible mountain system of Asia and a great wall between the Plateau of Tibet to the north and the alluvial plains of the Indian subcontinent to the south. It is divided longitudinally into 5 divisions from west to east. 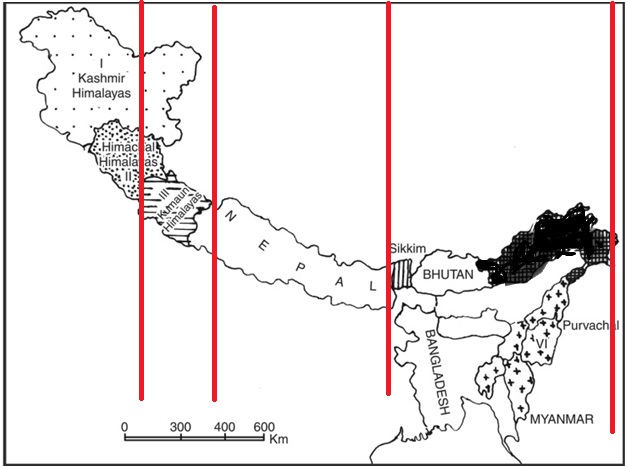 Division of the Himalayas from West to East

Kashmir Himalayas lies between the Indus River and Sutlej. A significant portion of the Himalayas lies in Jammu and Kashmir and Himachal Pradesh. This is also known as Punjab Himalayas.

In Jammu and Kashmir region:  It is characterized by high snow-covered peaks, deep valleys, interlocked spurs, and High Mountain passes. The range stretches for 700km in length and 500 km in width. It has a height of 3000 m with a large number of glaciers. The Ladakh region of the Kashmir Himalayas is dominated by cold desert conditions. The Kashmir valley which belongs to this division is surrounded by the Greater Himalayas and the Lesser Himalayas. The Karewa soil is found here and this area is famous for the saffron and other dry fruit cultivation.

In the Himachal Pradesh Region: All the three ranges- the greater, the lesser, and the outer Himalayas are well represented in this region. The northern slopes of the Himachal Himalayas are covered with thick forests, plains, and lakes. The southern slopes are rugged with forest-clad. The Kangra valley, Kullu- Manali lies here. These areas are highly productive and well known for orchards and scenic beauty. Dalhousie, Shimla, Chamba, Kullu- Manali and Dharam sala is the important hill station in this region. The important passes are Rohtang pass, Bara-Lacha, Shipki La.

This division lies between the Satluj and Kali River. The highest peak in this division is Nanda Devi. Important peaks in this region are Nanda Devi, Trisul, Kedarnath, Dunagiri, Kamet, Badrinath, Jaonli, Gangotri, and Bandarpunch. Pindari, Gangotri, and Milam are important glaciers in this division. The major hill stations are Mussorie, Nainital, Ranikhet, Almora, and Bageshwar. The important passes are Thaga La, Muling La, Mana, Mangsha Dhura, and Lipu Lekh.

This division stretches from the Kali River to the Tista River. The major part of it lies in Nepal except for the extreme eastern part- Sikkim Himalayas. The important peaks are the Mt. Everest, Kanchenjunga, Makalu, Dhaula Giri, Annapurna, Manaslu, and Gosainath. Nathu La and Jelep La are the important passes in this region.

This division lies between Tista and the Brahmaputra River (Dihang). It occupies the state of Arunachal Pradesh in India and Bhutan. On the southern border of Arunachal Pradesh, it takes a southerly turn, and ranges are arranged in North-South direction passing through Nagaland, Manipur, Mizoram, and Tripura called Purvanchal.  The Purvanchal is joined by Meghalaya Plateau in the west and its extension of the Myanmar mountain chain continues to Andaman and Nicobar Islands and the Archipelago of Indonesia.

When you travel in the Himalayas, you will see the following: (UPSC Civil Services Preliminary Examination 2012)

Which of the above can be said to be the evidence for the Himalayas being young fold mountains?

Frequently Asked Questions on Longitudinal Division of the Himalayas

Q 1. How are the Himalayas divided longitudinally?

Ans. The longitudinal division of the Himalayas include:

Q 2. What is the Kumaun Himalayas region?

Ans. The Kumaun Himalayas lies between the Satluj and Kali River. The highest peak in this division is Nanda Devi.
Also, See: