Maternal Mortality Rate (MMR) is defined as the number of maternal deaths per 100,000 live births due to pregnancy or termination of pregnancy, regardless of the site or duration of pregnancy. The maternal mortality rate is used to represent the risk associated with pregnancy among women.

In developing countries, the leading cause of death and disability among women of reproductive age are the complications that occur during childbirth and pregnancy.

In India, the number of deaths caused due to pregnancy and childbirth has been very high over the years but recent records show that there has been a decline in the MMR of India. It is tough to calculate the exact maternal mortality except where the comprehensive records of deaths and causes of death are available. So surveys and census are used to estimate the levels of maternal mortality.

Reproductive Age Mortality Studies (RAMOS) is presently considered the best way to calculate MMR. In this, different sources and records are analysed to get data regarding the death of women of reproductive ages and also through verbal autopsy to estimate the number of deaths. The MMR is calculated at both global and regional level every five years through a regression model.

Major observations as per the Survey – 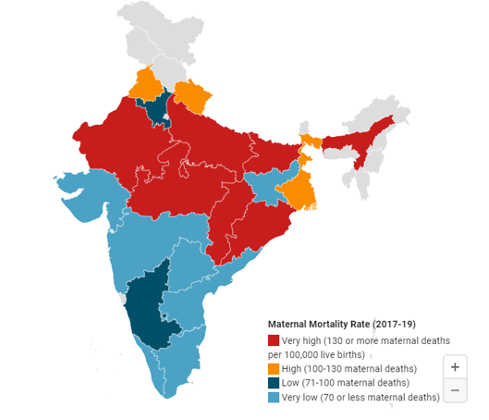 Given below is the MMR in India as per the Sample Registration System:

Candidates can refer to the UPSC Mains GS 1 Syllabus, Structure, from the linked article.

There are various reasons for the death of women during their reproductive age (18 to 39 years)that had been the cause of an increase in the maternal mortality rate. Given below are a few reasons for the rate of deaths of women due to pregnancy and childbirth:

Studies have shown that most deaths during pregnancy and childbirth are curable and can be controlled if proper treatment is provided to women. It has also been noted that calculating the exact MMR is not possible as multiple records of deaths are not recorded for reasons like abortion, ill-treatment and lack of medical attribution.

Result of MDG and SDG with respect to Maternal Mortality Rate

The Millennium Development Goals were set UNDP for all the member nations of the UN. MDG was a set of eight goals that were set for a better future of the world and the people living in it. The Sustainable development goals were undertaken by the members of the UN after a fifteen-year successful plan of the MDG.

The Millennium Development goals were successful in reducing poverty and infant mortality rate almost half since 1990. The latest report of Sustainable development goals released for 2019 has stated that a major decline in the number of deaths caused due to pregnancy and childbirth has been noted across the world.

The report also states that between 2015 and 2018, there has been an increase of 81 per cent assistance provided to pregnant ladies and that has been one of the major reasons for the decline in MMR. In 2018, the report released by SDG stated a decline of 37 per cent in the maternal mortality rate since 2000.

The following programs implemented by the government is playing a crucial role in reducing the Maternal Mortality Rate in India. 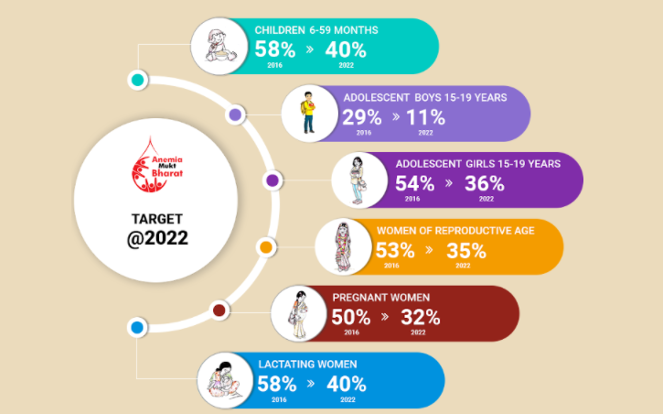 More on Anaemia Mukt Bharat in the link.

Candidates can refer to the Previous Year’s Governance Questions in UPSC Mains GS 2, from the linked article.

Ans. Maternal Mortality Rate is defined by the World Health Organization (WHO) as “the death of a woman while pregnant or within 42 days of termination of pregnancy, irrespective of the duration and site of the pregnancy, from any cause related to or aggravated by the pregnancy or its management but not from accidental or incidental causes.

Maternal Mortality Ratio is the annual number of female deaths per 100,000 live births from any cause related to or aggravated by the pregnancy or its management (excluding accidental or incidental causes). The maternal mortality ratio is a key performance indicator for efforts to improve the health and safety of mothers before, during, and after childbirth per country worldwide

Q 2. What are the reasons for the high maternal mortality rate?

Ans. Given below are a few causes for the high maternal mortality rate: