1. Citizenship Bill may have to wait for House nod 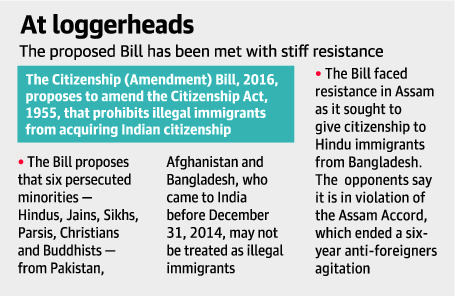 2. India’s manufacturing PMI eases in May

1. The democracy project in Bangladesh

What is the News?

The Awami League government’s success in turning around the economy and health care must not be overlooked. Our democracies in Asia have many limitations but there is no reason to let the West use that to misrepresent or subvert these national sovereignties.

1. The Error in Zero Tolerance

Merely subjecting them to an arduous legal process before NADA is not a long-term solution. We must recognise the socio-cultural reality of our sportspersons. Quite a few are from semi-urban or rural backgrounds. To them, sports is the only route to a better economic status. Literacy and language are serious impediments. They are subject to the whims and dictates of administrators. Amidst such intense pressure, they compete and carry our nation’s hopes. But when they err, or are accused of doing so, we disclaim all responsibility.

Making doping a criminal offence, as was once proposed, is an untenable idea which would subject athletes to an already crippled criminal justice system. A nation with a burgeoning young population cannot let inertia put it on a murky sporting track.

The order to partition Bengal was issued on 20th July 1905 which came into effect on 16th October 1905 while way back in December 1903, the partition proposals became publicly known followed by immediate and spontaneous protests. The formal proclamation of the Swadeshi Movement was made on 7th August 1905, in a meeting held at the Calcutta town hall.