In January 2021, the Sri Lankan Government declared officially that the country was hit by the worst economic crisis in its 73 year history.

On March 18, 2022 India extended a USD 1 billion line of credit to Sri Lanka on Thursday to help the country deal with the economic crisis.

How did a country, which in recent years, was doing well on all economic fronts as well on human development indices, come to face such an unprecedented crisis?

It is not because of a single factor, but a myriad of factors responsible for the current economic crisis. What those factors are will be highlighted in this article. The information in this article will be used in the sense that they can be asked in the Economy segment as well as the international affairs segment of the IAS Exam. 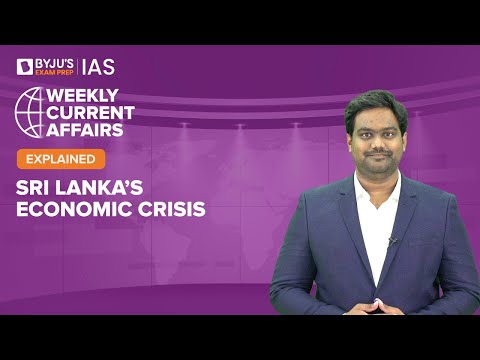 Sri Lanka is facing an unprecedented crisis due to economic mismanagement, corruption and an agricultural crisis.

For starters a series of policy miscalculations such as imposing tax cuts took a heavy toll on government revenues. This was part of a populist agenda that was used to win the 2019 presidential election and the subsequent 2020 parliamentary elections.

The cuts in taxes led to budget deficits soaring from 5% in 2020 to 15% in 2022. The bad monetary policies has led to soaring inflation that has triggered unrest and protests as ordinary Sri Lankans are unable to bear the high cost of living.

What’s more the country is on the verge of bankruptcy, as the remaining foreign reserves of US$ 2.3 billion (As of March 2022) is not enough to pay its debts. The national inflation rate increased to 17.5% in February 2022.

Sri Lanka depends heavily on imports to meet its various needs such as petroleum, food, paper, sugar, lentils, medicines, and transportation equipment, among other essential items.

A lack of foreign currency means the country does not have the money to buy (import) these commodities.

The economic crisis is accompanied by a severe food shortage. There was a rise in food prices that was caused by depreciation in currency. It forced the government on August 31, 2022 to impose an economic emergency. It gave the authorities the following powers:

The army was deployed to help better manage food rationing following a series of protests by the local populace.

What were the factors that triggered the Sri Lankan Economic Crisis

Some of the the factors that triggered the economic crisis in Sri Lanka were:

Now how does a food shortage figure into this economic crisis? For that a single agricultural policy is responsible, the detail of that will be discussed belows:

How did an Agricultural Policy cause a food shortage in Sri Lanka?

The Sri Lankan  government decided to make their country the first to produce their foodstuff from “100 % organic farming”. To this end they imposed a nationwide ban on chemical fertilizers and pesticides in June 2021.

All it was widely accepted, the program came under widespread criticism from the scientific and farming community for the following reasons:

The policy led to a massive drop in agricultural output by about 50%. The food shortages further deteriorated the situation at hand. The tea industry was the hardest hit as a result. The government was forced to import food as a result.

The situation was further aggravated by the falling national currency exchange rate, inflation rising as result of high food prices, and pandemic restrictions in tourism which further decreased the country’s income.

The severe shortage of food forced the government to introduce peacetime rationing of goods.

In November 2021, Sri Lanka was forced to abandon its policy to become the world’s first organic farming nation, leading to continuous food price rise and weeks of unrest and protests against it.

How has this crisis affected Indo-Sri Lankan Relations?

The current economic crisis has given a new life to the Indian-Sri Lanka relationship which was under strain over the ensuing decades, a fact taken advantage of by China who figured top in Sri Lanka’s foreign policy priorities.

Experts opine that Sri Lanka’s forex reserves have reached bottom-low and it faces mounting challenges in the form of rising unsustainable public debts, low international reserves and the need for large financing in coming years.

Thus, there is a need for ambitious fiscal consolidation based on high-quality revenue measures, raising income tax and VAT rates and minimising exemptions, complemented with revenue administration reform. Overall, the nation requires immediate economic reforms to have stable economic health in the long run.

The Sri Lankan economy has been facing one of its worst ever economic crises, resulting from mismanaged government finances and ill-timed tax cuts, besides the impact of the Covid-19 pandemic.

Sri Lanka’s economic freedom score is 53.3, making its economy the 132nd freest in the 2022 Index. Economic growth in Sri Lanka slowed from 2017 through 2019, turned negative in 2020, and recovered in 2021. During those same five years, economic freedom has declined

Is Chinese debt responsible for the Sri Lankan Crisis?

Despite several commentaries blaming Chinese debt as a factor for the Sri Lankan Crisis, Chinese Debt accounts for only 10% of the debt stock. Instead, the majority of Sri Lanka’s external debt stock is owed to international capital markets which accounted for 47%.