The Indian Flying Fox is a species (Pteropus medius) is a species of megabats native to the Indian subcontinent. It is also known as the greater Indian fruit bat.

One of the largest bats in the world it is also known as the carrier of many diseases that have affected the population of India from time to time.

Characteristics of the Indian Flying Fox

Its colour ranges black back that is lightly streaked with grey, a pale, yellow-brown mantle. It has large eyes, simple ears, and no facial ornamentation.

Further characteristics of the Indian Flying Fox is discussed in the table below:

Characteristics of a Indian Flying Fox

Behaviour of the Indian Flying Fox

The Indian Flying Fox is frugivorous, as in feeding exclusively on fruits and drinking nectar from its flowers. It is a generalist feeder, consuming any available fruits.

Indian flying fox roosts in treetops of large trees. Its roosting locations will be used for 10 years at a stretch. Like all bat species it is nocturnal in nature being active during the night and roosting during the day. Groups tend to leave their roost about 30 minutes after sunset.

Bats at the top of the roost tend to circle the roost and leave before the rest of the colony emerges.

Its preferred roosting spots are in open tree branches and in urban areas, buildings with limited natural light, preferring to be in close proximity to bodies of water and agricultural land. The more easily food is available the less likely a roosting nest of flying foxes to be found. 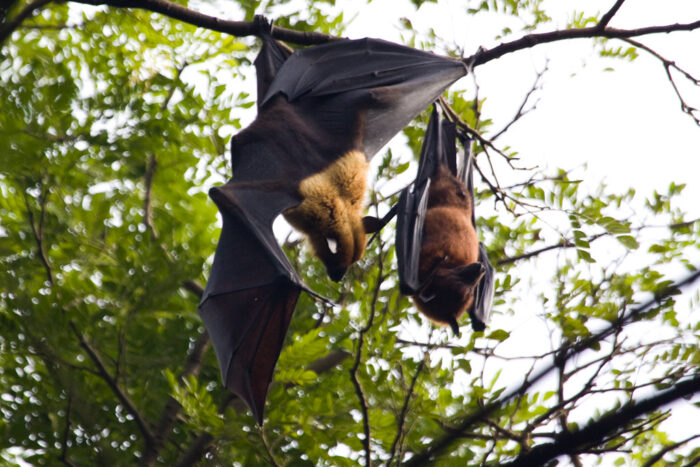 The IUCN Red List places the Indian Flying Fox places categorizes it as Least Concerned category. They are considered as pests and carriers of various harmful diseases. One example is the Nipah virus itself.

As far as the horticultural and the agricultural sector of India are concerned, the Indian Flying fox is vermin. An estimated 60% of fruits are damaged by the Indian fruit bat regardless of them being ripe or overripe.

The Indian Flying Fox population in Maldives was culled to a certain extent in order to protect fruit orchards. A non-lethal alternative to culling is making netting on fruit trees, using lights during night time and placing Singapore Cherry Trees as a means of distraction sicn the flying foxes are attracted to this variety.

Some tribes in India consider the meat of flying foxes a delicacy and even believe that they have medical properties, capable of curing asthma and chest pain. As of 2018 they were estimated to be  24,480 individuals of Indian Flying Fox spread through the subcontinent.

Which species are predators of the Indian Flying Foxes?

How dangerous is the Indian Flying Fox to humans?

Like other bats, India flying foxes are dangerous to humans as a source of disease, as they are the reservoirs of rare but fatal disease agents.