In this article, we feature the discussion on the topic: Judiciary versus Legislature. 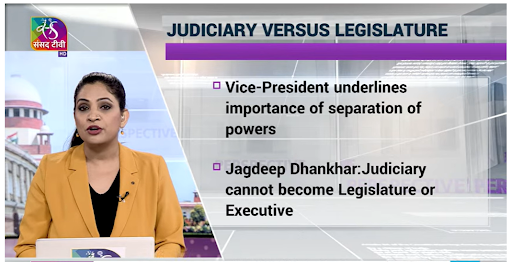 Context – The Vice-President, Jagdeep Dhankhar posed the question, “Can the Judiciary overrule the will of the people that is represented in the Parliament?” This comes amidst the ongoing row over the process of appointment of judges.

Presiding over the Rajya Sabha for the first time as Chairman on the opening day of the winter session of Parliament, Vice-President Jagdeep Dhankhar sent a strong message to the Supreme Court, referring to its 2015 judgement striking down the National Judicial Appointments Commission (NJAC) Act and calling it a glaring instance of severe compromise of parliamentary sovereignty and disregard of the mandate of the people.

The basic structure of the Indian Constitution cannot be abrogated even by a constitutional amendment. The Doctrine of Basic Structure was propounded by the Indian Judiciary in 1973 in the Kesavananda Bharati case to put a limitation on the amending powers of the parliament so that the “basic structure of the basic law of the land cannot be amended in the exercise of its constituent power” under the Constitution.

Know more about the collegium system in the link.

Advantages of the Collegium System

Criticism of the Collegium System

In recent years there has been a lot of criticism over the appointment of judges for the apex court and high courts through the collegium system.

Reforms in the Judiciary

Both centre and judiciary should stop the blame game and focus collectively on reforming the judicial system.