With effect from October 31st 2019, the state of Jammu and Kashmir has been officially bifurcated into the Union Territories (UT) of Jammu & Kashmir and Ladakh. It is important for aspirants preparing for the IAS Exam to know how the political map of India has changed with the creation of two new Union Territories.

Details about the new Political Map of India

Political Map of India after bifurcation of the erstwhile State of Jammu and Kashmir into Union Territories of J&K and Ladakh. 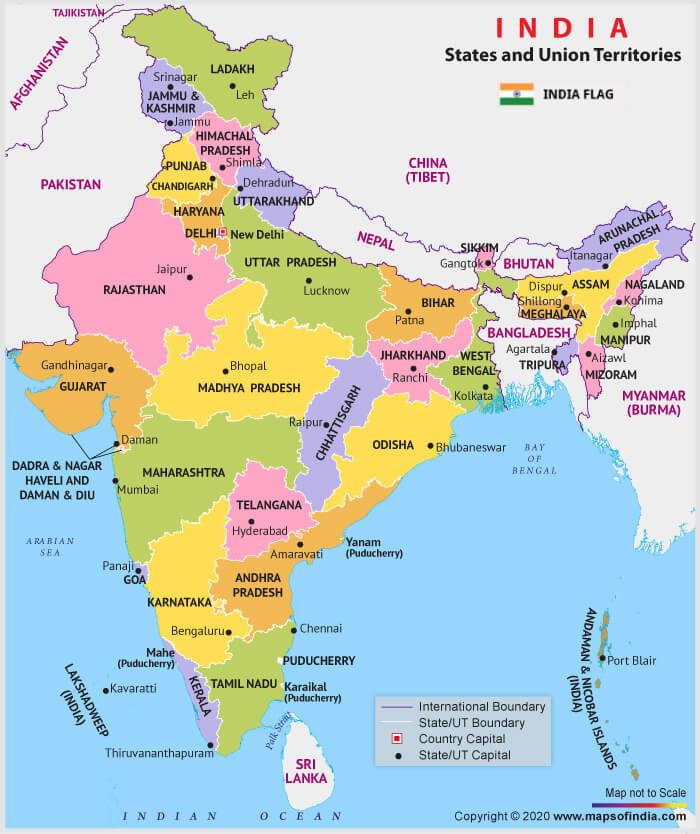 Read about the main features of the Former Status of Jammu and Kashmir at the linked article.

What has changed with the bifurcation of the State of Jammu & Kashmir into two Union Territories?

Also, read about Jammu and Kashmir – Instrument of Accession [October 26, 1947]

How many states in India are there?

The list of States and Union Territories in India are mentioned below:

UPSC aspirants can get NCERT Notes on Our Country – India for Geography at the linked article and prepare for the upcoming Civil Services Exam.

Choose the correct answer from the below given-options

B) Only statements 1 and 3 are true

C) None of the above statements are false.

D) All the above statements are false.

Aspirants can get the updated prelims and mains UPSC Syllabus for the upcoming Civil Services Exam at the linked article and accordingly start their preparation.

Frequently Asked Questions about the Political Map of India

What is the India political map?

Ans. The India Political map shows all the states and union territories of India along with their capital cities. It comprises a total of 28 states along with eight union territories. India is the second most populated country in the world and the world’s largest democracy.

Which Indian state has the most cities?

Among major states, Tamil Nadu continues to be the most urbanized state with 48.4 percent of the population living in urban areas, followed by Kerala (47.7 percent) upstaging Maharashtra (45.2 percent).

To get the latest exam updates, study material and preparation tips, visit BYJU’S for expert assistance.