Steps to curb the spread of Fake news

ISRO’s 2019 calendar is dotted with 32 new missions, an ambitious record-making goal for the most number of Indian missions in a year. In contrast, 2018 saw about 14 missions against a goal of 18, including the failed GSAT-6A satellite of April. 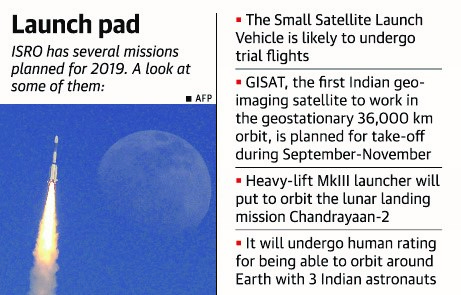 An analysis of ISRO’s achievement

Bioplstics – Present options are not eco-friendly

1. Madhya Pradesh to get ‘spiritual department’

1. The lowdown on the state of the economy

What is the lowdown?

What is the current situation?

Why do farmers want more?

What is the stand of the government?

Objectives of the mission

Perhaps the best summary of the principles that the nationalist movement brought to the Constituent Assembly is the Objectives Resolution (the resolution that defined the aims of the Assembly) moved by Nehru in 1946. This resolution encapsulated the aspirations and values behind the Constitution. All powers and authority of sovereign and independent India and its constitution shall flow from the people.

Based on this resolution, our Constitution gave institutional expression to these fundamental commitments: equality, liberty, democracy, sovereignty and a cosmopolitan identity. Thus, our Constitution is not merely a maze of rules and procedures, but a moral commitment to establish a government that will fulfil the many promises that the nationalist movement held before the people.