1. India’s share of river water will no more go to Pakistan: Modi

Prime Minister Narendra Modi has said India would put to use its share of water from the rivers flowing to Pakistan and ensure that every single drop was used for the country’s farmers. Russia has moved to fill the void left by the United States in northern Syria, deploying troops to keep apart advancing Syrian government forces and Turkish troops, underscoring the sudden loss of U.S. influence in the area and illustrating how the power balance in the region has shifted rapidly.

The issue has been comprehensively covered on 10th October 2019 Comprehensive News Analysis. Click Here to read.

According to the National Health Authority (NHA), the scheme will continue to focus on reducing catastrophic out-of-pocket health expenditure, improving access to quality health care and meeting the unmet need of the population for hospitalisation care, so that India can move towards the vision of Universal Health Coverage.

The Union Ministry of Housing and Urban Affairs has initiated an inquiry into alleged irregularities during the Swachh Survekshan 2019 for Madhya Pradesh — declared the best in solid waste management, and boasting eight cities in the top 25, the most for any State. 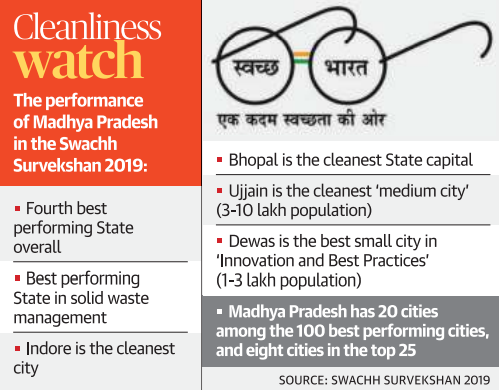 1. Another grim reminder – On Economic Slowdown

The World Bank International Monetary Fund (IMF) annual meetings kicked off on a sombre note, with the IMF downgrading global growth in 2019 to 3%, the slowest since the financial crisis.

What are the reasons for the global economic slowdown?

According to IMF, as per the World Economic Outlook (WEO) report, 2019 — Global Manufacturing Downturn, Rising Trade Barriers, following are the causes of a “synchronised slowdown”:

What is the way ahead for India?

2. For a wider food menu

September, 2019 was observed as ‘Rashtriya Poshan Maah’ (National Nutrition Month), with the theme “Complimentary Feeding”. The purpose of the initiative was to take the message of nutrition to every nook and corner of the country and to focus on complimentary food, treatment and prevention from infections in children.

Agricultural biodiversity ensures a wider food menu to choose from.  Small farmers, livestock and seed keepers in India are on the front-line of conserving the unique agrobiodiversity of the country. The loss of globally significant species and genetic diversity will have adverse impact on diets. India must take efforts to synergise biodiversity conservation, agricultural production and local development for healthy diets and a healthy planet.

1. A cost-effective way to power generation

India aims to have a renewables capacity of 175 GW by 2022 and 500 GW by 2030. The editorial analyses how India can achieve these targets in a cost-effective manner.

What would be a cost-effective way to enhance the renewable energy generation capacity of India?

1. Shutdown in parts of Manipur against 1949 merger with India

Radio Frequency Identification (RFID) technology uses electromagnetic fields to automatically identify and track tags containing electronically-stored information. It uses radio waves to communicate between two objects: a reader and a tag. RFID communication is the same as two way radio communication in the sense that information is transmitted or received via a radio wave at a specific frequency.

Non-governmental organisations (NGOs) “substantially” financed by the government fall within the ambit of the Right to Information Act. Private bodies which perform public services or which receive funds or concession from the government do not come under the ambit of RTI Act.

Rafale is a French word meaning “gust of wind” and is a French-origin Delta winged, twin-engine multirole fighter aircraft manufactured and designed by Dassault Aviation. The Rafale fighter jets are being produced for both the French Air Force and for carrier-based operations in the French Navy. It has been marketed for export to several countries and was selected for purchase by the Indian Air Force, the Egyptian Air Force, and the Qatar Air Force. India will only be the fourth country, after France, Egypt and Qatar, to fly the Rafale.

A Graded Response Action Plan (GRAP) is a set of stratified actions that are taken once the pollution level reaches a certain specified limit. Approved by the Supreme Court in 2016, the plan was formulated after several meetings that the Environment Pollution (Prevention and Control) Authority (EPCA) held with state government representatives and experts. The result was a plan that institutionalised measures to be taken when air quality deteriorates. GRAP works only as an emergency measure. As such, the plan does not include action by various state governments to be taken throughout the year to tackle industrial, vehicular and combustion emissions. When the air quality shifts from poor to very poor, the measures listed under both sections have to be followed since the plan is incremental in nature.