What are Warli Paintings? 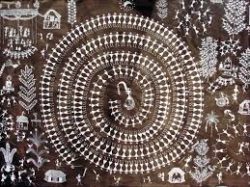 For more on tribal paintings of India, click on the linked article.

Experts from India, Bangladesh, Nepal and Myanmar come together for enhancing conservation of river dolphins in the region.

The Sunderban delta is a unique ecological space where Gangetic as well as Irrawaddy Dolphin are present, spread over India as well as Bangladesh.

The government had announced the initiation of a Project Dolphin along the lines of Project Tiger in order to enhance the number of river dolphins.