Geography is an important subject for the UPSC IAS Exam. In this article, you will learn about the topic ‘climate of India’ for the IAS exam. This article covers relevant sub-topics such as seasons of India, the Monsoons, factors determining the climate of India, etc. You can also download a PDF at the end of the article.

The Climate of India is “monsoon” type which is found mainly in South-Asia and South-East Asia. The word “monsoon” is derived from the Arabic word “mausim” which means seasons. Originally, the word “monsoon” was used by Arab navigators several centuries ago, to describe a system of seasonal reversals of winds along the shores of the Indian Oceans, especially over the Arabian Sea, in which the winds blow from south-west to north-east during the summer season and from north-east to south-west during the winter season. In other words, monsoons are periodic (seasonal) winds in which there is a complete reversal of the wind direction after every six months.

Factors determining the Climate of India

The factors which determine the climate of a place can be broadly classified into two:

Factors related to location and relief

The climate and associated weather conditions in India are governed by the following atmospheric conditions:

Mechanism of weather in the winter season –

Mechanism of weather in summer season

The Inter-Tropical Convergence Zone (ITCZ) is a broad trough of low pressure in equatorial latitudes. Here the north-east and south-east trade winds converge and air tends to ascend. This convergence zone lies almost parallel to the equator but moves north or south with the apparent movement of the sun. In July, ITCZ is located around 20°N – 25° N latitude, over the Gangetic plain and is also called the monsoon trough. This monsoon trough enhances the development of thermal low over north and north-west India. Due to this shift of ITCZ, the trade winds of the Southern Hemisphere cross the equator between 40°E and 60°E longitude and start blowing from south-west to north-east due to the Coriolis force and give rise to the south-west monsoon. The ITCZ moves to the Southern Hemisphere in winter which causes reversal of winds from north-east to south and south-west. These are called north-east monsoons.

The monsoons are experienced in the tropical area roughly between 20°N and 20°S. The following facts help in understanding the mechanism of the monsoons in India – 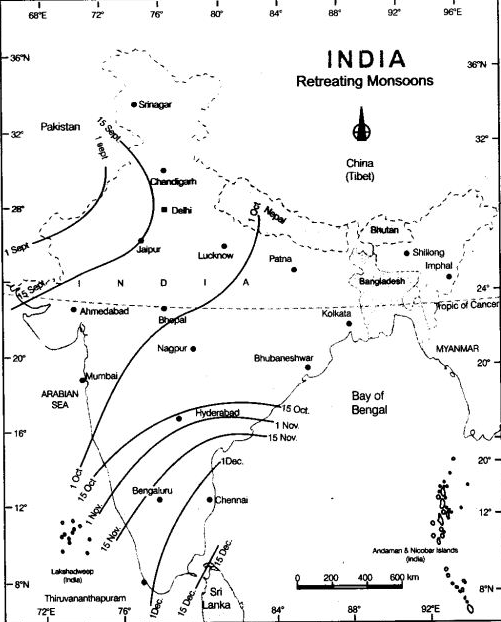 The subcontinent of India has great latitudinal dimensions. There are different seasons from Kashmir to Kanyakumari. The meteorologists, however, recognise, the following four seasons –

India is often referred to as a country with a Tropical monsoon type of climate. The large size of India, its latitudinal extent, the Himalayas in the north and the Indian Ocean, Arabian Sea and Bay of Bengal in the south have resulted in great variations in the distribution of temperature and precipitation in the subcontinent of India. A number of attempts have been made by climatologists, geographers and agricultural experts to divide India into climatic regions. Temperature and precipitation are two important factors that are considered to be decisive in all the schemes of climatic classification. The classification of climate, however, is a complex exercise. There are different schemes of classification of Climate.

Koppen’s classification of the Indian climate

Read more on Koeppen’s Climate Classification in the link.