1. India gets $1 billion loan from World Bank for solar mission

1. A fillip to growth, and maybe inflation

3. Is FDI really a gift horse?

a) On The Right Track

b) On this day 25 years ago, an invaluable devaluation

a) Second Launch of MRSAM Successful

a) Returns on education: Here’s some bad news for India

b) Stage set for next-gen tax reforms; will India move with the times?

a) The deciding vote and why it matters

b) Powering GST calls for a fine balance

a) Good move in mining; now for regulation

a) Chemicals similar to Brussels bomb found in Hyderabad house

e) Centre to subsidise only some seats on regional routes

i) Retail inflation for industrial workers jumps to 6.59% in May

j) April-May fiscal deficit at 43% of Budget estimates; much higher than a year ago

1. India gets $1 billion loan from World Bank for solar mission

3. Is FDI really a gift horse?

2. On this day 25 years ago, an invaluable devaluation

Others:
a) Second Launch of MRSAM Successful

A Medium Range Surface-to-Air Missile (MRSAM) was successfully test-fired from the Integrated Test Range off Odisha Coast. The MRSAM is jointly developed by DRDO and IAI of Israel for the Indian Air Force. The missile guided by a Radar system and on-board avionics successfully hit a Pilotless target aircraft.

Many Indian industries like BEL, L&T, BDL, TATA group of companies besides other private industries have contributed to the development of a number of subsystems which have been put into use in this flight test. The MRSAM system provides reliable air defence at medium ranges.

The meeting of India-Nepal Inter-Governmental Committee on Trade, Transit and Cooperation to Control Unauthorised Trade was held on 28-29 June 2016 at New Delhi

In pursuance of India’s Act East Policy and demonstration of India’s commitment to peace and prosperity of Indo-Pacific region, Indian Naval ship Satpura arrived at Hawaii on 30 Jun 2016 to participate in the 25th edition of Exercise RIMPAC.

Exercise RIMPAC is the largest multilateral naval exercise in the world and is held biennially in the Western Pacific Ocean. Indian Navy’s association with Ex RIMPAC commenced with participation as an ‘Observer’ in 2006, 2010 and 2012. In 2014, Indian Naval participation was enhanced with deployment of Indian Naval ship Sahyadri in the 24th edition of the exercise. The current edition of the exercise is scheduled off Hawaii from 30 June – 04 August 16 and is likely to be attended by 27 countries

d)DM dedicates DCN to the Nation

The Defence Minister dedicated the Defence Communication Network (DCN) to the nation.

The DCN is a strategic, exclusive, secure and state-of-the-art communication network. Implementation of DCN is a proof of strength of the Indian industry and has reaffirmed the emphasis of the Government on Make in India, program.

The DCN is a major step towards ensuring Network Centricity across the three Services, Integrated Defence Staff and Strategic Forces Command. The network provides converged voice, data and video services to the three Services based on secured system with adequate redundancy.

The fourth in the series of Follow-on Water Jet Fast Attack Craft (FO-WJFAC) for the Indian Navy was launched on 30 Jun 16 at a ceremony at Garden Reach Shipbuilders & Engineers Ltd (GRSE), Kolkata.

The Minister of Railways formally launched NIVARAN portal, an online system for redressal of service related grievance of serving and former railway employees.

RITES Ltd., a PSU under the Ministry of Railways, has supplied 60 Broad Gauge passenger coaches (LHB type) to Bangladesh Railway (BR) against a contract agreement of 120 coaches. An intercity train with these coaches was flagged off at Dhaka the Prime Minister of Bangladesh.

2. The Financial Express:
a) Returns on education: Here’s some bad news for India

b) Stage set for next-gen tax reforms; will India move with the times?

3. The Business Line:
a)The deciding vote and why it matters

b) Powering GST calls for a fine balance

c)  To Read: Launching a million new export ventures
4. The Economic Times:
a) Good move in mining; now for regulation

5. Quick Bits and News from States
a) Chemicals similar to Brussels bomb found in Hyderabad house

The explosives recovered from the house of one of the five Islamic State (IS) suspects, arrested from Hyderabad could be similar to chemicals used by the bombers who struck at Brussels airport earlier this year, a senior National Investigation Agency (NIA) official said.The chemical — triacetonetriperoxide (TATP) — recovered from the house of Habeeb Mohammad, can be assembled from chemicals easily available in the market. Officials said it was the group’s leader, Mohammad Ibrahim Yazdani, an electronics engineer was the only one among the arrested men who was directly in touch with their handler in Syria. The handler, officials believe is Shafi Armar alias Yousuf Al Hindi, a former Indian Mujahideen (IM) member who had fled the country after the 2008 serial bomb blasts.

Ministry of Home Affairs has informed the Prime Minister’s Office (PMO) that they were against a proposal to allow “visa-free” entry to business visitors and tourists from eighteen key countries, including China. The ministry is against dispensing with the visa requirement for business visitors and tourists from countries belonging to the BRICS (Brazil, Russia, India, China and South Africa) and the proposed Regional Comprehensive Economic Partnership (RCEP) countries. 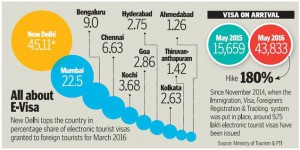 Money held by Indians in Swiss banks has fallen by nearly one-third to a record low of 1.2 billion franc (about Rs.8,392 crore) amid a continuing global clampdown on the famed secrecy wall of Switzerland’s banking system.This is the lowest amount of funds held by Indians in the Swiss banks ever since Switzerland began making the data public in 1997 and marks the second straight year of decline.

They will launch the new Squadron 45 ‘Flying Daggers’. The remaining 18 aircraft including four trainers are to be inducted in 2018

e) Centre to subsidise only some seats on regional routes

The government will unveil a regional connectivity scheme with a fare of Rs.2,500 for hour-long flights operating from regional airports, but only some seats on such aircraft would be available at the subsidised price

Two Taliban suicide bombers on Thursday killed at least 27 people and wounded around 40 in an attack on buses carrying newly graduated cadets on the western outskirts of Kabul, officials said.

The attacks underline the threat to security in Afghanistan about a week ahead of a NATO summit in Warsaw, where leaders are expected to discuss whether to maintain support for the Kabul government 15 years after the Taliban were driven from power.

Beyond the immediate impact, the attacks cast further doubt on any resumption of peace talks with the Taliban.

Even before the death of former leader Mullah Akhtar Mansour in a U.S. drone strike last month, prospects appeared remote after the Taliban refused to join talks sponsored by the United States, China and Pakistan.

Under new leader Mullah HaibatullahAkhundzada the insurgents have made clear they will continue attacks on the Western-backed government, and maintained their demand for international forces to quit the country.

Reacting to comments in New Delhi by US Undersecretary of State for political affairs on India’s effort to join the NSG and the South China Sea issue,China slammed the United States for trying to drive a wedge among regional countries

Western nations have reminded Sri Lanka that much more remains to be achieved in the areas of reconciliation and accountability.

In their response to an oral update made by the United Nations High Commissioner for Human Rights and the subsequent speech of Sri Lanka’s Foreign Minister at the UN Human Rights Council on Wednesday, the countries urged Sri Lanka to see to it that the commitments made in the resolution adopted by the HRC unanimously in October last were carried out.

i) Retail inflation for industrial workers jumps to 6.59% in May

“The year-on-year inflation measured by monthly CPI-IW (consumer price index industrial workers) stood at 6.59 per cent for May 2016, as compared to 5.86 per cent for the previous month (April, 2016) and 5.74 per cent during the corresponding month of the previous year (May, 2015),” Labour Ministry said in a statement.

j) April-May fiscal deficit at 43% of Budget estimates; much higher than a year ago

Fiscal deficit in the first two months of the current fiscal was Rs 2.28 lakh crore or 42.9 per cent of Budget estimates for 2016-17, much higher than the year-ago period.

“On June 29th, 2016, the negotiation on the Double Taxation Agreement for the Avoidance of Double Taxation and the Prevention of Fiscal Evasion with respect to Taxes on Income between Cyprus and India was successfully completed, in New Delhi” the finance ministry of Cyprus said in a statement.

a) The United Nations Conference on Trade and Development (UNCTAD)

d) The Organisation for Economic Co-operation and Development (OECD)