Rajya Sabha TV programs like ‘The Big Picture’, ‘In Depth’ and ‘India’s World’ are informative programs that are important for UPSC preparation. In this article, you can read about the discussions held in the ‘Big Picture’ episode on “India – Japan Cooperation” for the IAS exam. 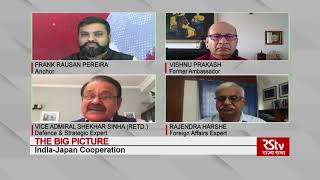 The relevance of the recent naval exercises

What is the level of cooperation and understanding between Japan and India on the maritime front?

Is the Indo-Japan relation presently in a safe space?

Will the Quad be taken to the next level? Will many countries come together against China’s aggression?

How concerned is China about its Malacca dilemma?

What are the other areas of cooperation between the two to make this relationship even more strong?

Are there any areas of concern in the bilateral relationship that needs to be addressed?