The Indian Pangolin (Manis crassicaudata), also called thick-tailed pangolin and scaly anteater is a pangolin native to the Indian subcontinent.

It is easily recognised by its overlapping scales that acts as an armor for its body.

Characteristics of a Pangolin

The scales of a pangolin are aries depending on the colour of its environment. It feeds on primarily insects (insectivore) eating ants and termites, digging them out of mounds and logs. It is active during night and it rests in deep burrows during daytime

Lacking any teeth, the pangolin relies on its tongue to feed itself, relying on its strong stomach to aid in its digestion. Its characteristic scales covers its upper face and body excluding the belly and inside of the legs

Further characteristics of the Pangolin are given as follows:

Characteristics of an Indian Pangolin

For more about species in news, visit the linked article. 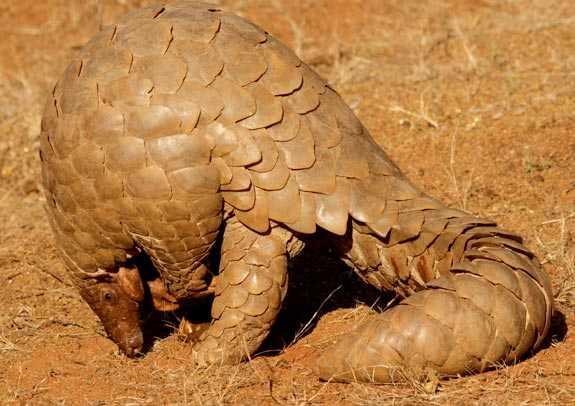 Behaviour and Habitat of Indian Pangolin

The Indian Pangolin has been found in various types of forests including Sri Lankan rainforests and in hills. It inhabits grasslands and secondary forests and also can survive in dry and desert regions.

The pangolin has two types of burrows:

Feeding burrows are smaller in size and are found mostly in the spring season when prey for the pangolin is available in greater concentrations.

Burrows of living are large in space and will be used by the pangolin longer in comparison to its feeding counterparts. It is used to sleep and rest during daytime

The pangolin uses its specially adapted long, sticky tongue through which it is able to feed on a variety of insects

Conservation of the Indian Pangolin

The Indian pangolin is listed on CITES Appendix I since January 2017 and is protected in all range countries.

As per the IUCN Red List the Indian Pangolin is listed as ‘Endangered.’

The Indian Pangolin is hunted for its meat and scale both consumed locally and internationally. Its parts are used as food and medicine

Along with being made as an aphrodisiac, it is also used to make charms or bone jewelry. The leather is used to make footwear and other leather goods. The majority of hunting is carried out by locals or professional hunters. They are also threatened by deforestation and habitat loss.

What are Pangolin scales made of?

Pangolin scales are made of keratin, the same material found in rhino horns. Not even sharp teeths of lions can penetrate the armored scales.

Why are Pangolins the most trafficked animal in the world?

Pangolin meat is considered a delicacy in countries like China. They are also used in traditional Chinese medicine.

Is Pangolin trafficking illegal in China?

The Chinese government continues to allow the use of pangolin scales for traditional medicine despite promises to crack down on a trade that has made them the most illegally trafficked mammals in the world.