Vikram Sarabhai, the ‘Father of Indian space programme’ was born on 12 August 1919 in Ahmedabad, Bombay Presidency. In this edition of This Day in History, you can read about the life and contribution of Dr. Vikram Sarabhai for the IAS exam.

Born into a Gujarati industrialist family, Dr Vikram Ambalal Sarabhai was educated at Gujarat College and the University of Cambridge. His doctoral thesis at Cambridge was on ‘Cosmic Ray investigation in Tropical Latitudes’. 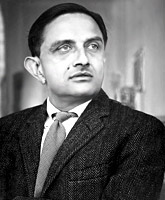 He has also conducted research in cosmic rays at the Indian Institute of Science in Bangalore under the guidance of Nobel laureate Dr C V Raman (7th November 1888 – 21 November 1970). After returning to India from Cambridge, he set up the Physical Research Laboratory (PRL) at Ahmedabad in 1947. PRL was one of the first organisations in India to conduct research in the field of space sciences.

Dr Sarabhai understood the importance of having a space research programme for a developing country and convinced the government of it. He pioneered space research in India. He was instrumental in establishing the Indian Space Research Organisation (ISRO) in 1969. He also set up India’s first rocket launching station at Thumba, Thiruvananthapuram with the help of Dr Homi Bhabha. Thus, he is widely regarded as the ‘Father of Indian space programme’.

He was also the Chairman of the Atomic Energy Commission (Founded on August 3, 1954) and played a major role in the establishment of many educational Institutes in India. His involvement in the development of India in terms of education and science was visible even after his death, based on his dialogue with NASA, The Satellite Instructional Television Experiment (SITE), launched in 1976.

His contribution to the field of Indian Space Centre has been great in every respect. His contribution in launching the first Indian Satellite, Aryabhatta is also undeniable. Apart from Science and Space, he took an active interest in fields of business and industry. He was the founder of the Ahmedabad Textile Industry’s Research Association and managed it till 1956.

Vikram Sarabhai, along with, The ‘Father of India’s Nuclear Science Program‘, Homi Bhabha had set up the first rocket launching station in India. It was built in St Mary Magdalene Church near Thiruvananthapuram.

Candidates preparing for the upcoming UPSC 2021 exam must be aware of the life and achievements of Vikram Sarabhai.

He also established the Vikram A. Sarabhai Community Science Centre (VASCSC) in the 1960s to popularise science and maths among students and the public. He was given the position of Vice President in the fourth U.N.Conference on ‘Peaceful uses of Atomic Energy’.

After the death of Homi Bhabha, Vikram Sarabhai was largely responsible for the establishment and development of nuclear power plants in India. He was intensively involved in educating children in remote areas of the country through satellite communication and worked for the evolvement of satellite-based remote sensing of natural resources.

Given below is the list of Institutes established by Vikram Sarabhai along with the honours and awards he was presented with during his life:

Choose the correct answer from the below-given options.

Also read the biographies of: