Gist of Yojana April 2020 Issue: The Constitution of India

A Constitution is a document of people faith and aspirations possessing a special legal sanctity. It is the fundamental law of a country and all other laws and customs of the country in order to be legally valid shall conform to the constitution. It is the supreme law of the land. It sets out the framework and the principal functions of various organs of the government. In short, the Constitution is the rule book of the nation.

The Preamble to the Constitution declares India to be a sovereign, socialist, secular democratic republic and a welfare state committed to secure justice, liberty and equality for the people and for promoting fraternity, dignity of the individual and unity and integrity of the nation.

“Human rights are not a privilege conferred by the government. They are every human being’s entitlement by virtue of his humanity.” – Mother Teresa.

By the Universal Declaration of Human Rights, the nations of the world were specifically exhorted to act as the guardians of human rights. By 1966, the United Nations General Assembly adopted two important covenants which are at the same time both general and universal, one dealing with civil and political rights and the other with economic, social and cultural rights. Both the covenants principally deal with rights which were to be enjoyed by individuals.

Many countries have passed legislations to bring their laws as far as possible in conformity with the spirit and letter of the Universal Declaration of Human Rights and other International instruments.

There have been judicial pronouncements which have upheld the superiority of Fundamental Rights as provided in the Constitution of India.

It may therefore be seen that safeguarding individual’s rights, so protected and sacrosanct, by judicial activism has been a catalyst in creating a national atmosphere where various aspects of human existence have been given an impetus to enable them to be respected and developed as part of human right of common man

It is the cardinal duty of the state and the non-state actors to work in unison to enable the best promotion and protection of human rights of common man in the country and overcome all the challenges.

Challenges in promotion and protection of Human Rights:

India’s socio-economic cultural framework and its colonial past have sprung many challenges in its efforts to promote and protect human rights. The main issues where majority of human rights violations in India take place are as under:

Following the principles laid down in the Constitution, India has performed magnificently when it comes to safeguarding the human rights of the common man. The Executive, Legislature, Judiciary and the autonomous institutions like NHRC etc. have all contributed towards creating a social framework where human rights are ensured to all. There are challenges but they can be met with the concerted efforts of all. It is also very important to understand that rights are best safeguarded when we perform our duties.

The ideals and aspirations of a renascent India and the vision of our founding fathers are contained in the Preamble, the Fundamental Rights (Part III) and the Directive Principles of State Policy (Part IV) of the Constitution. These three may aptly be described as the soul of the Constitution and the testament of the founding fathers to the succeeding generations together with the later part on Fundamental Duties (Part IV-A).

Indian Constitution is built on the foundations of certain fundamental values that have been embedded in it to ensure that there should be fairness and justice for every citizen of India. The inclusion of the Fundamental Rights in the Constitution is in furtherance of the same thought. The object is to ensure the inviolability of certain essential rights against political vicissitudes. However, it has been made very clear that: 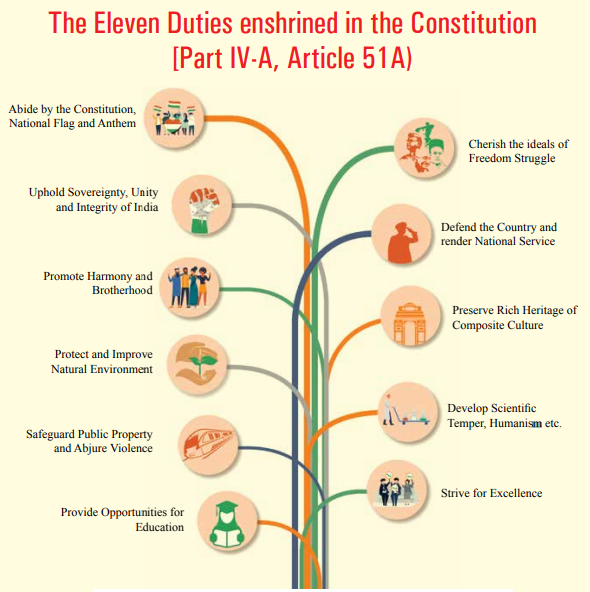 Enforcement of the Fundamental Duties of Citizens:

Chapter 5: Drafting of the Constitution of India

The Constitution of India is one of the most comprehensive and longest enumerated documents of its kind in the world. It is lex loci i.e. the parent of all laws in the country. The three pillars of Indian State (Legislature, Executive & Judiciary) derive their authority from the Constitution.

Framing of the Constitution

Read about the Borrowed Features of Indian Constitution.

Very few amendments to our constitution have had such wide ranging effect on the common man as the First Amendment. For this reason, it shall always be much discussed, deliberated and continue to be applied or adapted according to the felt necessities of the time.

The Parliament plays a central role in the Indian system of representative governance, affecting all aspects of lives of citizens. Many social reforms and economic progress have been led by Parliament. As the central legislative body in India, the Parliament has four main roles—it makes laws, it holds the executive to account for its actions, it allocates government finances, and represents the interests and aspirations of citizens.

Gandhiji by virtue of his long and varied experience in the working of the State system in Europe, Africa and Asia, always argued for four-tier system of governance i.e., Center, State, District and Village level administration. His idea of Panchayat Raj was to raise village as an important unit of democracy. He wanted a bottom-up approach of governance, i.e., village to central level governance.

Despite the progress the Panchayati Raj system, there are many agendas, which are yet to be implemented for achieving full Swaraj as desired by Mahatma Gandhi:

The Constitution’s main purpose is not merely to confer powers on the various organs of the government, but also to restrain those powers. Constitutionalism envisages checks and balances and puts the powers of the legislature, executive and judiciary under restraint. The very essence of constitutionalism is that no organ of the state may arrogate powers to itself, beyond what is specified in the Constitution.

Doctrine of Separation of Powers:

The doctrine of separation of powers propounded by the French thinker, Montesquieu, to maintain checks and balances, became the guiding principle of the constitutions of modern democratic states. The separation of powers may not mean equal balance of powers, but it definitely acts as a check on one another.

The Spirit of Constitutionalism:

The Role of Judiciary:

Special Powers of the Supreme Court:

Globalisation has resulted in the widening and deepening of systemic interdependencies amongst nations. However, the ideal of just world order will not be realised without adherence to international rule of law. This goal necessitates finding common approaches to counter problems of terrorism, human rights, environmental degradation, international trade and utilisation of natural resources beyond national jurisdiction. Therefore, the sovereign States are actively participating in international negotiations for framing of treaties at international, regional and subregional levels. The Constitution of India lays down clearly the bases on which foreign policy should be framed and respected. The basic thrust of Article 51 is to maintain international peace and security, international relations and international obligations, matters which, under the Indian Constitution, fall exclusively within the domain of the Union.

Article 51 of the Constitution brought good name and respect for the country by the international community and also helped in strengthening to espouse the causes of developing nations before international organisations.

The principles of the Constitution in the Preamble assure social justice and promote the dignity of the women. India has ratified various international treaties and human rights conventions to secure gender equality.

Other Initiatives of Government of India:

India is committed to achieve the Sustainable Development Goals (SDGs), which offers opportunity for historical transformation of gender equality. The country’s investment in economic empowerment of women and poverty eradication will bring radical change in the scenario of gender equality. The empowering women will bring them into the mainstream decision-making, entrepreneurship, etc., which will contribute in the enhancement of the economy.

Schemes and Policies for Minorities

The Ministry in particular implements programmes/schemes for the six centrally notified minority communities namely, Buddhists, Christians, Jains, Muslims, Parsis and Sikhs as under:

In addition to the above, the Government also implements schemes for strengthening State Waqf Boards and coordinates arrangements for annual Haj pilgrimage.

Promoting health and prevention of disease and risk factors is an important aspect of the Rashtriya Kishor Swasthya Karyakram under the National Health Mission. Various platforms being used to promote health and well-being of adolescents through Social and Behaviour Change Communication are as follows:

Public health being a State subject, all the administrative and personnel matters, including the recruitment of counsellors in public health facilities lie with the respective State Governments. The shortage of health human resource in public health facilities varies from State to State depending upon their policies and context. However, under National Health Mission (NHM), financial and technical supports are provided to the State/UTs to strengthen their healthcare systems including support for recruitment of health human resource based on the requirements posed by them in their Programme Implementation Plans (PIPs) within their overall resource envelope.