The individuals who are on the path to becoming Buddha or attaining salvation are known as Bodhisattvas. In Sanskrit, Bodhisattva means “a person who intends to become a buddha.”

Bodhisattva is one of the ten realms of whose teaching are included in Buddhism. In this article, we shall discuss at length the meaning, ideals and list of Bodhisattvas. These are also important from the perspective of the Genera Studies paper for the IAS Exam. Aspirants must carefully analyse the aspects discussed further below.

Given below is the Bodhisattva definition based on the different schools of Buddhism.

Buddhism and the related terms, its definition, schools and traditions, are all important parts of the UPSC Syllabus for both, the prelims and mains exam.

Aspirants can get the NCERT Notes on List of Buddhist Councils and Important Texts at the linked article.

The important Bodhisattvas have been discussed below in detail. 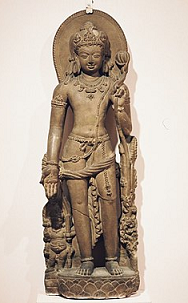 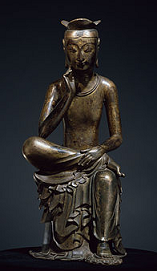 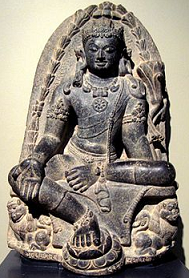 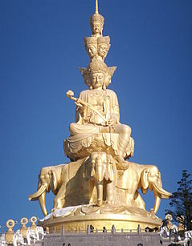 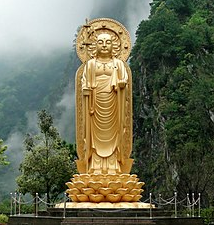 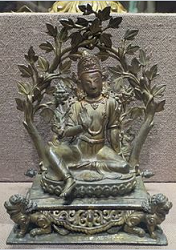 Also, known as the twin both of Ksitigarbha, the name Akasagarbha means “boundless space treasury”

These are eight of the greatest Bodhisattvas in Buddhism and constitute an important part of the Buddhist beliefs and followings. IAS Exam aspirants must also learn about the Teaching of Buddha that revolves around the middle path of the living, the eight-fold path to enlightenment, and four noble truths.

In comparison to the art and sculptures of Buddha, Bodhisattvas are represented as more princely figures. They drape a rich attire, with robes, threads, beads, elaborate hairdos, etc.

Each Bodhisattva is represented through its expression and essence. Sculptures of these are widely spread across different parts of the world.

As mentioned in Mahayana teachings, Buddha is firstborn as a Bodhisattva, and then after many lifetimes, progresses to attain Buddhahood. Thus, this is also a progressive approach and inspiration for Buddhist art and culture.

Also, the images of Bodhisattvas have resulted in a lot of people mistaking Buddhism to be the same as Jainism, but it is not true. To know the Difference and Similarities between Buddhism and Jainism, aspirants can visit the linked article.

For any further assistance with regard to the exam updates, study material and preparation tips, candidates can turn to BYJU’S for expert assistance.