3. China’s robotics rush shows how its debt can get out of control

3. Coal India to hold e-auction for power plants this month

3. Keeping the vigil in Kokrajhar

4. ‘A higher rate will be inflationary’ (Interview excerpts – P Chidambaram, former Finance Minister,discusses why the Congress dropped its demand of a constitutional cap of 18 per cent on the standard GST rate, and how the provision on the dispute resolution mechanism may not pass the constitutional test)

1. Tehran hangs nuclear scientist who ‘spied’ for US

3. GST Bill to be taken up in Lok Sabha today

4. After Rajnath, will it be Jaitley’s turn in Pak?

7. IS claims responsibility for Belgium attack

8. US declassifies its ‘playbook’ for drone attacks

3. China’s robotics rush shows how its debt can get out of controlTopic: China

(For a command economy, China has a decentralized fiscal system with local governments responsible for about 85 per cent of fiscal spending but receiving only 50 per cent of tax revenues. Officials turn to debt to fill the gap)

(Cancers of all type claim approximately 6,80,000 lives each year in India, making it the leading cause of death in the country after heart diseases, according to the World Health Organization) 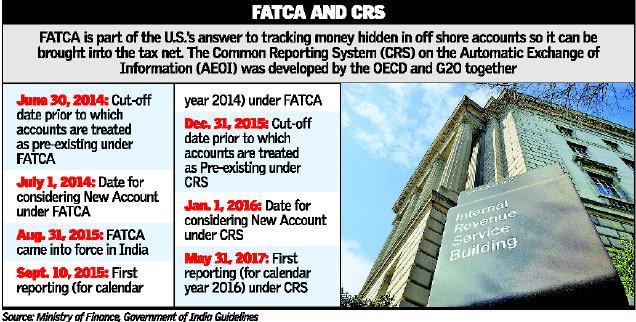 Note: Looks incomplete because the article is the first one of a series

From what we have heard so far, the GST doesn’t really seem like a “one nation, one tax.” Isn’t it true that there won’t be a single national tax across states and goods and services and instead a central tax plus 29 state taxes? Plus, in all probability, cesses by States and the Centre approved by the GST council?

Will it be possible for GST to be collected also on Indian Railways tickets that currently attract a service tax of about 15 per cent, and other user charges that are currently tax-exempt?

How much lower is the 2013-14 tax base (on the basis of which the CEA had given his Revenue Neutral Rate (RNR) and standard GST rate recommendations) from the current one?

Revenue Neutral Rate (RNR):Taxing procedure that allows the government to still receive the same amount of money despite changes in tax laws. The government may lower taxes for one particular group of people, but raise taxes for another group. This allows the revenuethat they receive to remain unchanged (neutral)

Has the CEA been asked to revise his recommendations?

Can GST be a game-changer unless applied to a comprehensive base at moderate rates?

The NIPFP’s calculations had shown that there is no way the rate can be below 24 per cent. Why didn’t the Centre take the suggestions on record earlier?

3. Keeping the vigil in KokrajharTopic: Insurgency

4. ‘A higher rate will be inflationary’ (Interview excerpts – P Chidambaram, former Finance Minister,discusses why the Congress dropped its demand of a constitutional cap of 18 per cent on the standard GST rate, and how the provision on the dispute resolution mechanism may not pass the constitutional test)Topic: Insurgency

Are you suggesting that the provision for the GST Council to set up a dispute resolution mechanism could be challenged in courts? What’s the constitutional provision on disputes and how is the proposed provision in conflict with it?

Dr. Subramanian’s report assumes higher tax rates on gold to 2-4 per cent and uses the 2013-14 tax base which did not include the cesses imposed in the last two years, the government says.

It seems that the Central legislations for the GST will most probably come as money bills now. The Rajya Sabha may not get to have a say on this cap.

From what we have heard so far, the GST being readied doesn’t really seem like a ‘one nation, one tax’. Isn’t it true that there won’t be a single national tax across States, and goods and services? It will actually be a Central tax plus 29 State taxes. There could be 3-4 bands for these taxes for different types of goods and services, plus, in all probability, GST Council-approved cesses by States and the Centre.

How can States be convinced that the GST won’t lead to loss of their financial autonomy?

Will the GST translate into an altered federal relationship between the Centre and the States?

Iran has executed a nuclear scientist convicted of handing over “confidential and vital” information to the United States, a judicial spokesman said on Sunday.The scientist, Mr. Amiri had disappeared in Saudi Arabia in June 2009 and resurfaced a year later in the United States.He then walked into the Iranian interests section at the Pakistani Embassy in Washington and demanded to be sent home. He returned to Iran in July 2010.

2. SC ruling on Lodha panel unconstitutional, says Katju“The Supreme Court could have no doubt forwarded the Lodha Committee’s recommendations to Parliament with their own recommendation that they be enacted as a law by Parliament, but to direct itself that the recommendations be implemented is clearly a legislative act not within the court’s domain.”The judgment has not only violated the Tamil Nadu Societies Registration Act but also the Constitution,” Justice Katju said. Justice Katju said the Supreme Court plainly ignored the law that any change in the rules of the BCCI should have been made through a special resolution initiated under the Tamil Nadu Societies Registration Act. Complaints against the BCCI should have been filed before the Registrar of Societies, the competent authority under the Act. (Note: A possible case of judicial outreach)

3. After Rajnath, will it be Jaitley’s turn in Pak?The government is considering whether to send the Union for the next SAARC ministerial meeting later this month.After the Home/Interior Ministers’ meet, the Finance Ministers will meet to set the economic agenda for the SAARC summit in November which the Prime Minister is expected to attend.

4. New weave: skilling through correspondenceThe National Institute of Open Schooling (NIOS) under the Ministry of Human Resource Development and the Union Ministry of Textiles have tied up to provide education to weavers and their children through a specially designed curriculum.The initiative will focus on identified weavers’ clusters such as Varanasi, Sivasagar, Murshidabad, Tiruchi, Prakasam and Guntur. The MoU signed on Sunday between NIOS, which focuses on education in open and distance mode, and the Textile Ministry requires them to collaborate to “offer secondary and senior secondary level education with specialised subjects on design, marketing, business development, etc., for handloom weavers and their families through knowledge sharing, resource optimisation, and synergy of institutions” through open schooling, an NIOS note said.

The number of people engaged in hand weaving and allied activities in India is 43 lakh. A census conducted in 2009-10 revealed that “the level of education of 83.3 per cent among adult handloom workers is below high school/secondary,” the official note said.

5. Thai junta’s Constitution wins people’s approvalThailand voted on Sunday to approve a new Constitution drawn up by the ruling junta, preliminary results showed, in a major victory for the army and a blow to the stuttering pro-democracy movement.Sunday’s referendum was the first time Thais have been able to go to the polls since Army chief-turned-Prime Minister Prayut Chan-O-Cha toppled the elected government of Yingluck Shinawatra in 2014. The kingdom is split after a decade of political turmoil that has damaged growth, seen democracy shunted aside and left scores dead in rival street protests.Thai military has successfully seized power 12 times since the end of absolute monarchy in 1932 and this Constitution will be the kingdom’s 20th.

7. US declassifies its ‘playbook’ for drone attacksThe Obama administration has disclosed its rules and procedures for targeting individuals for killing outside conventional war zones — including with drones — further lifting the secrecy surrounding one of its most disputed tactics for fighting terrorism.

The newly declassified document shows that if the top lawyers and leaders of the departments and agencies on the National Security Council agree that a proposed strike would be lawful and appropriate, the Pentagon or the CIA can proceed.

If they disagree, or if the person to be targeted is an American citizen, the matter must go to the President for a decision.