Difference Between Planet and Satellite

For starters, a planet is a body orbiting a star that is big enough to be rounded by its gravity, not massive to cause a thermonuclear reaction.

A satellite is an object in space that orbits or circles around a larger object. Out of this, there are two types of satellites: Natural and Artificial Satellite. 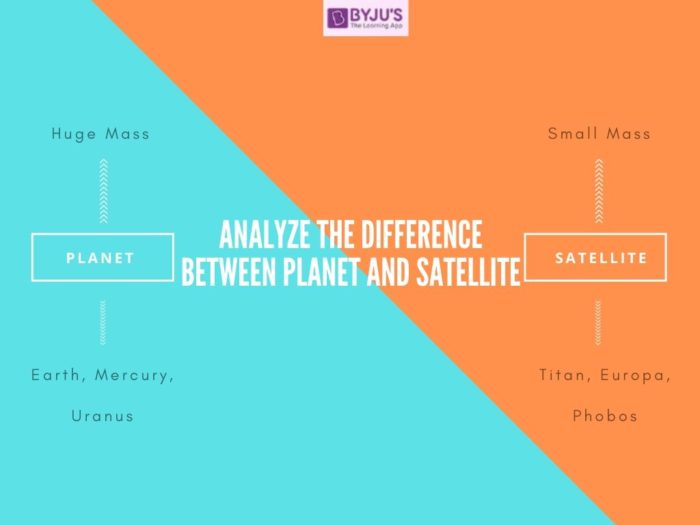 This article will further highlight the differences between Planet and Satellite within the context of the IAS Exam.

Differences between Planet and Satellite

After learning about the difference between Planets and Stars, refer to the below-given links to comprehensively prepare for the Science and Technology Section of the Civil Service Exam.

FAQ about Planet and Satellite

How many planets are there in our solar system?

Our solar system is made up of a star (Sun), eight planets (Mercury, Venus, Earth, Mars, Jupiter, Saturn, Uranus and Neptune) and countless smaller bodies such as dwarf planets (Pluto), asteroids and comets. The dwarf planets are also known as exoplanets.

What are the types of satellite and give example?

There are two different types of satellites – natural and man-made. Examples of natural satellites are the Earth and Moon. Examples of man-made satellites include the Hubble Space Telescope and the International Space Station.

Become familiar with the general pattern of the IAS Exam by visiting the UPSC Syllabus page. For more exam-related preparation materials, refer to the links given in the table below: