1. Understanding context of SC ruling on triple talaq: Divorce rate of Muslim women is thrice that of men

Context: Supreme Court Ruling on the issue of triple talaq, which questions the women dignity.

Legal provision to settle the cases of Divorce 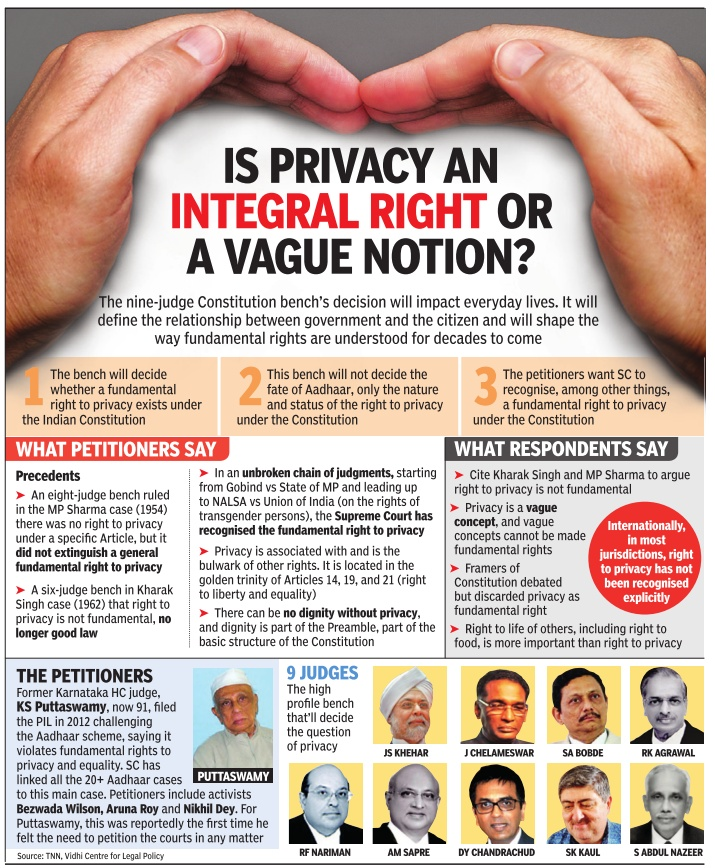 Apprehension expressed by the Supreme Court:  collection and use of data is the risk of personal information falling in the hands of private players and service providers.

2. Liquor sale ban does not extend to municipal areas: SC

New revised rules and its impact

Key Fact: In 2016, there were nearly 25 lakh Indians working in Saudi Arabia

The objectives of FSDC would be to deal with issues relating to:

3. ‘RBI not for NBFCs taking deposits’

What is difference between banks & NBFCs?

Direction to all Departments and Ministries

Reasons behind the move

5. Tax, in the bigger picture

Context: GST avoids the challenge of shifting to a higher proportion of direct taxe

NBFCs lend and make investments and hence their activities are akin to that of banks; however there are a few differences as given below:

Saudization or Saudisation of the workforce—the replacement of foreign workers with Saudi nationals in the private sector—is the official national policy of the Kingdom of Saudi Arabia.

Which of the statement given above is/are incorrect?

The IUCN Red Book of Threatened Species, founded in 1964, is the world’s most comprehensive inventory of the global conservation status of biological species..

Question 1.  You are running a Non Governmental Organization to educate orphans, beggars and other single/lonely child. Appreciating the work, Government of India sanctions a grant of Rs. 2 lakhs/year lapsable fund. But due to your commitment towards Civil service examination, you could only spend Rs. 50,000/- this year. A friend advises you not to return the remaining amount as it would result in labeling the NGO as inefficient and reduce the grant for next year. S/he also suggests you to manipulate the accounts and use the remaining Rs.1, 50,000/- along with the next year’s grant without misusing the purpose of the grant. So what is your stand?

Points on a stand to return the unused grant

Points in favor of friend’s opinion