Impact on trade and businesses:

Nut Graf: Removing or simplifying  unnecessary regulations, certifications, tests and other requirements creates a great scope for more UK businesses in India to enter the market and for those already established to expand. This would bring more UK investment in India and improve overall trade relations.

Nut Graf: India is quickly catching up with global trends and with greater prospects in the global satellite communication market, the Department of Space  should release the pending new Spacecom policy  with clear guidelines to end uncertainty over the launch of commercial services in India. Rollout of satellite broadband communication services can close the digital divide in India.

Syllabus: Issues related to the Vulnerable section of the population.

Difference between Abandonment and Surrender:

Under the above conditions, the child is eligible to surrender.

Nut Graf: Wide publicity about the provisions of the surrender of the child is the need of the hour. It is the responsibility of all the stakeholders that no child is deserted and denied their basic rights. Moreover, parents/guardians/functionaries should report cases of abandonment without facing any legal risk.

1. The U.K. is staring into an economic abyss

Syllabus: Effect of policies of developed countries on India’s interest.

Mains: UK economy and its impact on the global economy.

Context: Unveiling of the mini budget in Britain

Consequences of the Recent economic measures in the UK:

Related Link: Are we headed for a recession in 2022? Check Answer at BYJU’S

Nut Graf: The economy of Britain is facing a potential risk. The recent measures announced by the British government have further exacerbated the economic crisis, especially for small businesses and households. The instability of the British economy can further impact the economies of other countries.

Context: Recently, a survey was commissioned by the Union Ministry of Water Resources to assess the functioning of the Jal Jeevan Mission. Context: Four leaks were reported at different points in the Nord Stream pipelines, designed to carry gas from Russia to Europe via the Baltic sea.

What are the Nord Stream pipelines? 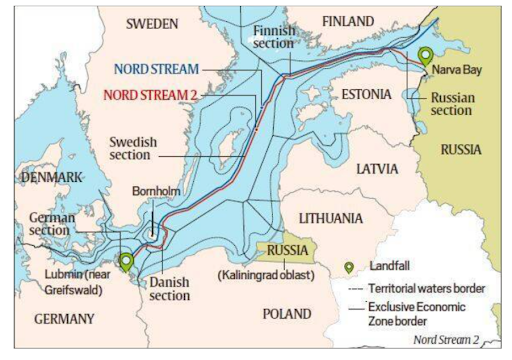