1. All you need to know about Modi’s US visit

5. ‘India never opened a window of opportunity with Pakistan’

1. Clear the air on FDI in retail

2. A long road to justice

2. The Financial Express: Indian economy: Here’s why it is time to speed up reforms

3. The Financial Express: Can UDAY overcome challenges, provide affordable power to all?

g) 17 of 20 smart cities ready with SPVs for project

– Pay respects to US soldiers at Arlington Cemetery

– Address to Joint meeting of US Congress

-U.S initiative to nominate India for membership of the Asia Pacific Economic Cooperation (APEC) is being sought

-restarting the negotiations for a bilateral investment treaty (BIT)

– Negotiations on 6 nuclear reactors by Westinghouse in Andhra Pradesh

– US investment in renewable energy programme

(The Union Ministries of Drinking Water and Sanitation, Water Resources and Youth Affairs are working on the campaign in a collaborative manner)

(There are 5,169 villages located along Ganga falling under 1,651 gram panchayats (GPs) in 52 districts of five states – UP, Uttarakhand, Bihar, Jharkhand and West Bengal from where the holy river flows through)

Note: Take a look at the Nuclear Energy: A Global Fact Sheet in the print edition of the Hindu

2. A long road to justiceTopic: Law and order

(11 persons have been found guilty under Section 302 of the Indian Penal Code (IPC). The Special Investigation Team (SIT) has pressed for the capital sentence. It is now for the judge to take the call, after hearing the pleas of the convicts, and decide whether the killing fell in the rarest of rare cases meriting death)

Category: Conservation, sensibility and good will Others:
1. PIB
2. The Financial Express: Indian economy: Here’s why it is time to speed up reformsTopic: Economy

Items returned included religious statues, bronzes and terra cotta pieces, some dating back 2,000 years, looted from some of India’s most treasured religious sites. Among the pieces returned is a statue of Saint Manikkavichavakar, a Hindu mystic and poet from the Chola period (circa 850 AD to 1250 AD) stolen from the Sivan Temple in Chennai, which is valued at $1.5 million

To ensure majority of the funds allocated under the Mahatma Gandhi National Rural Employment Guarantee Scheme (MGNREGS) is spent on water conservation-related works, the Centre is planning to come out with a performance outcome report of such works done in 2015-16.

The outcome report will list out the initiatives that states have taken towards building farm ponds, canals, bunds, revitalising traditional water resources, and other such projects. “This time around, we are not only asking for a financial performance appraisal from the states, but also want to know what work they have done with the annual MGNREGS funds, particularly in conservation of water, which is a priority area for the government” said an official statement Drug price regulator National Pharmaceutical Pricing Authority (NPPA), however, has also increased prices of some of the smaller volume packs of commonly used intravenous fluid such as glucose and sodium chloride injections

f) Government to increase land ownership among rural womenthe Centre will propose to states to give priority to households where men are willing to share land ownership with their wives, as part of strategy for subsidies for the rural housing scheme 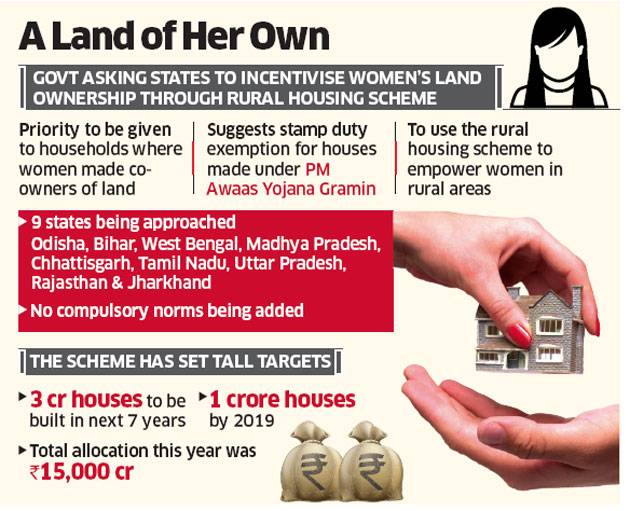 g) 17 of 20 smart cities ready with SPVs for projectAs the Ministry of Urban Development aims to kick-start smart city projects by June 25, marking the first year of launch of the flagship mission, as many as 17 cities out of the 20 selected in the first round, have already incorporated special purpose vehicles (SPVs)

With the signing of The Logistics Exchange Memorandum of Agreement (LEMOA) between India and US: