4. Seeing the new normal in Kashmir

1. Chinese Foreign Minister’s Delhi visit is an occasion to start a conversation with Beijing

4. Hanle – a potential site for the Thirty Meter Telescope

7. Video Surveillance to be installed at 1000 Railway Stations under Nirbhaya Fund

The Indian Express
1. Chinese Foreign Minister’s Delhi visit is an occasion to start a conversation with Beijing

The Government has given ‘in-principle’ approval for setting up Laser Interferometer Gravitational Wave Observatory (LIGO) in India. The LIGO-India project will establish a state-of-the-art gravitational wave observatory on the Indian soil in collaboration with the LIGO Laboratory in the U.S. run by Caltech and Massachusetts Institute of Technology. The project will bring unprecedented opportunities for our scientists and engineers to dig deeper into the realm of gravitational wave and take global leadership in this new astronomical frontier. LIGO-India will also bring considerable opportunities in cutting edge technology for the Indian industry which will be engaged in the construction of eight kilometre long beam tube at ultra-high vacuum on a levelled terrain. The LIGO-India project will be jointly coordinated and executed by three premier Indian lead institutions viz., the Inter-University Centre for Astronomy and Astrophysics (IUCAA), Pune, the Institute for Plasma Research (IPR), Gandhinagar and the Raja Ramanna Centre for Advanced Technology (RRCAT), Indore. Some of the Universities in the country will also participate in the project.

Under the Mega Science Projects, an amount of Rupees105 crore has been made in XII Plan outlay by Department of Atomic Energy (DAE)-Department of Science & Technology (DST) towards LIGO-India. Out of which, the share of contribution of DST will be Rupees 55 crore including 50% of seed-funding amount of Rupees 9.70 crore and DAE’s share would be Rupees 50 crore. No financial sanction has been issued so far for the project.

The Government of India has recently released National Civil Aviation Policy (NCAP) 2016 which envisages Regional Connectivity Scheme (RCS). The Scheme will inter-alia be implemented by way of Viability Gap Funding (VGF) for operators under RCS. VGF will be shared between Ministry of Civil Aviation and the State Government in the ratio of 80:20 and for the North-Eastern States the ratio will be 90:10. The payment of the full amount of the VGF will be made to the airline operator from the Regional Connectivity Fund (RCF) and the State Governments will be subsequently asked reimbursement.

Many areas of the country viz., north, northwest, central and northeast Peninsula have experienced 8 or more Heat Wave (HW) days on an average per season. Compared to previous four decades, there was noticeable increase in the Severe Heat Wave (SHW) days over the country during the past fifteen years. The past decade is the warmest decade for the country as well as for the globe.

The increase is due to a number of citizen friendly measures taken by the Government particularly integration of Prime Minister Office Public Grievances Redress Mechanism with CPGRAMS, periodic review of grievances through Pro-active Governance and Timely Implementation (PRAGATI) platform by the Prime Minister, regular review meetings for monitoring pendency of grievances by the Department of Administrative Reforms and Public Grievances (DARPG) and also higher expectations of the citizens from the Government.

4. Hanle – a potential site for the Thirty Meter Telescope

Hanle in Ladakh has been identified as one of the potential alternate sites for the Thirty Meter Telescope (TMT). The original site for TMT was Mauna Kea in Hawaii in the United States of America. The construction work for TMT at Mauna Kea was started but had to be stalled due to revocation of Permit by orders of the Supreme Court of Hawaii.

(i)                  The acreage under cotton has decreased by around 7% as against previous year due to switching over to other crops in Northern & Central Regions.

Under Swachh Bharat Mission (Urban), 115 cities have been declared Open Defecation Free (ODF) till date. 22.60 lakh individual household toilets and 93,985 seats of Community/ Public toilets have been constructed against the Mission period target of 1.04 crore and 5.07 lakh respectively. Out of total 82,609 no. of wards, 39,376 no. of wards have been covered with 100% door-to-door collection of municipal solid waste.

7. Video Surveillance to be installed at 1000 Railway Stations under Nirbhaya Fund

The proposal of Ministry of Railway namely Integrated Emergency Response Management System has been appraised by the Ministry of Women and Child Development under Nirbhaya Fund which includes installation of video surveillance at 1000 railway stations.

TPP will affect textile and clothing sector of India (and of all non-TPP member countries such as Brazil or China) in two ways:

Read: Make in India, Finance in the UK

The Central Bureau of Investigation on Thursday filed a charge sheet against former ISRO Chairman G. Madhavan Nair and other senior officials in the Antrix-Devas deal case for allegedly facilitating a wrongful gain of Rs.578 crore to Devas Multimedia Private Limited.It is alleged that the government officials abused their position to favour Devas by giving them rights for delivery of videos, multimedia content and information services to mobile phones using S-Band through GSAT-6 and GSAT-6A satellites and terrestrial systems in India. They, thus, caused a wrongful gain of Rs.578 crore to the private firm and its owners.The CBI probe revealed that when a proposal for budgetary support of Rs.269 crore for approving design, manufacture and launch of GSAT-6/INSAT-4E (PS1) was placed at the 104th meeting of the Space Commission on May 26, 2005, it was allegedly not informed that an agreement for leasing out the S-Band had already been struck with Devas 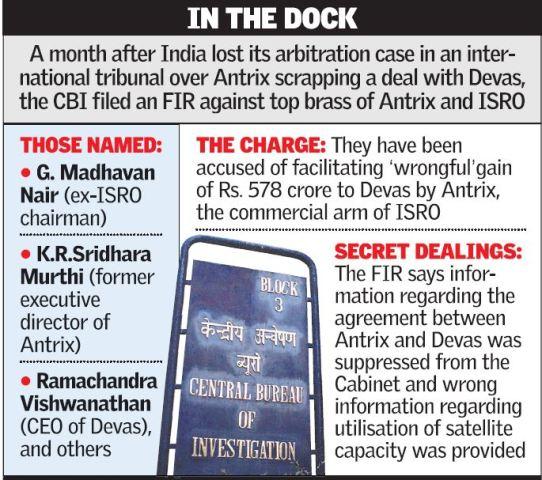 The Enforcement Directorate has readied a formal request to be sent to the United Kingdom under the Mutual Legal Assistance Treaty (MLAT) for the “transfer” of Kingfisher Airlines promoter Vijay Mallya to India in the Rs. 900 crore IDBI Bank loan default case.

Starting this year, the census of MSME units in the country will be done online instead of relying on physical surveys with the intention of creating a comprehensive database with real-time information on different enterprises. This database will eventually be used for public procurement purposes and would also be used by public sector enterprises to scale up their purchases from small enterprises.

The MSME databank could become a “one-stop source of information on small enterprises, including their credit and technology requirements as well as raw material and marketing needs.” The minister added that no grant or subsidy will be given to any MSMEs unless their data is captured on the new MSME databank.

The portal will allow the MSMEs to apply for loans from the various banks.

Maldives President Abdulla Yameen on Thursday gave his seal of approval to the controversial defamation Bill. On Tuesday, Parliament of Maldives had adopted the Bill on Defamation and Freedom of Speech with 47 Members voting in favour and 31 against it.

Under the law, defamation is a criminal offence. In November 2009 when Mohamed Nasheed was President, it was made a civil infraction. Dismissing criticism that it would criminalise free speech, the government said it would provide “a layer of protection” for those who may fall victim to “scurrilous and defamatory” articles.