Difference Between Bhakti and Sufi Movements

The Bhakti movement refers to the theistic devotional trend that emerged in medieval India.

Sufism may be best described as a practice of asceticism, which through belief and practice helps believers attain nearness to God. 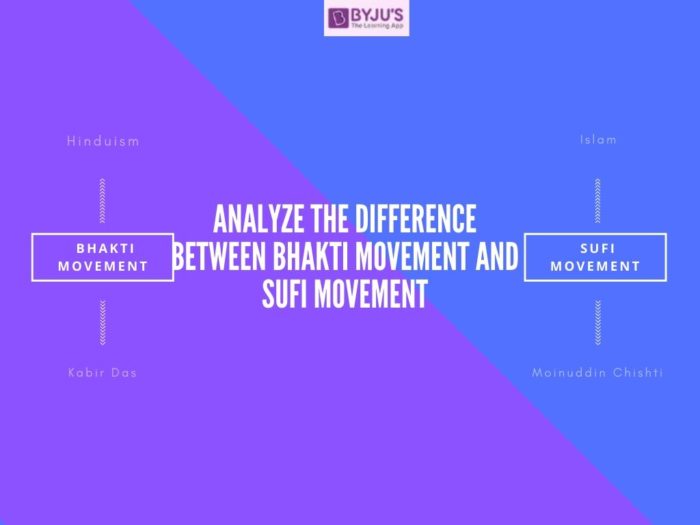 The Bhakti and Sufi Movements of Medieval India played a crucial role in creating a composite culture whose legacy can be seen to this day. It is one of the most commonly asked questions in the UPSC History segment.

In this regard, this article will give details about the difference between Bhakti and Sufi Movements.

Differences Between Bhakti and Sufi Movements

These were the main differences between the Bhakti and Sufi Movements. These details from this article will help the candidates to know about this topic in detail and be able to answer any related questions easily in the Civil Services Exams.

You can know more in detail about these two movements and other topics for UPSC History by referring to the links given below:

When did the Sufi movement come to India?

The Sufi movement came to India two centuries before the Bhakti movement and spread among the Muslims. The Chishtiya Sufi order was established in India by Khwaja Moinuddin Chishti in the 12th century.

Who was the founder of Bhakti movement?

The leader of the Bhakti movement was Shankaracharya, a great thinker and a distinguished philosopher. It was further propounded by Chaitanya Mahaprabhu, Namadeva, Tukaram, Jayadeva. The movement’s major achievement was its abolition of idol worship.

For more UPSC-related preparation materials and other articles refer to the link given in the table below: