Difference between Bureaucracy and Democracy

Difference between Bureaucracy and Democracy is explained here in detail.

Bureaucracy refers to both a body of non-elected government officials and an administrative policy-making group. The public administration in many countries is an example of a bureaucracy. Bureaucracy as a political theory is mainly a centralized form of management.

Democracy is a form of government in which the people have the authority to choose their governing legislation. The word Democracy is derived from Greek Words Demos (meaning people) and Kratos (meaning rule).

Visit the given link for information on dates, structure and other details of IAS Exam.

Learn to differentiate Democracy with other forms of government too by referring to the following links: 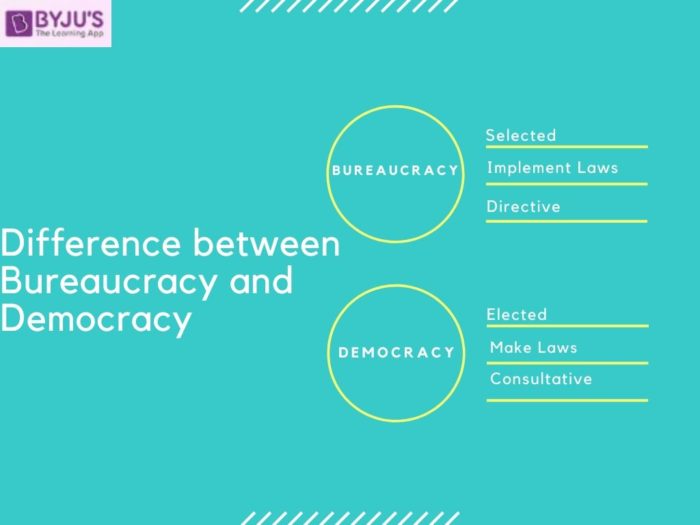 The major differences between Bureaucracy and Democracy are:

Get the Complete List of Difference between Articles – History, Polity, Economics, Geography and more in the linked article.

What does bureaucracy mean in government?

The federal bureaucracy performs three primary tasks in government: implementation, administration, and regulation. When Congress passes a law, it sets down guidelines to carry out the new policies. The bureaucracy often has some flexibility, known as administrative discretion, in actual implementation.

What is the realation between democracy and bureaucracy?