Difference between Democrat and Republican

Difference between Democrat and Republican is explained here in detail.

Democrat is a proponent of democracy, or democratic government. Democratic Party of USA is the world’s oldest active political party. They are more aligned towards liberal ideology.

Republican can refer to an advocate of a republic, a form of government that is not a monarchy or dictatorship, and is usually associated with the rule of law. Republic Party is one of the 2 major parties of the USA.

Visit the given link for information on dates, structure and other details of IAS Exam.

Read the related difference between articles from below: 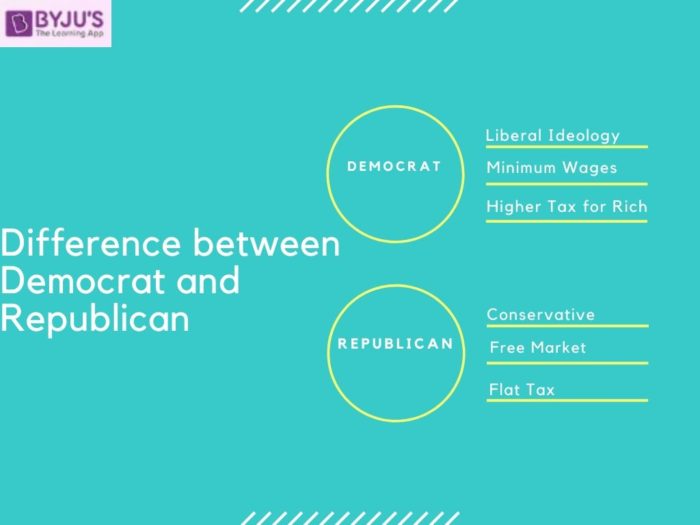 You may also read first the Difference between Democracy and Republic to understand the fundamentals.

The major differences between Democrat and Republican are:

For UPSC preparation, check the Complete List of Difference between Articles – History, Polity, Economics, Geography and more in the linked article.

After learning about the differences between democrat and republican visit the below-given links to stay updated with the latest current affairs for the Civil Services Exam.

Who are the Democrats?

The Democratic Party is one of the two major contemporary political parties in the United States, along with its main historic rival, the Republican Party. It was founded around 1828 by supporters of Andrew Jackson, making it the world’s oldest active political party.

Who are the Republicans?

The Republican Party, also referred to as the GOP (“Grand Old Party”), is one of the two major contemporary political parties in the United States, along with its main historic rival, the Democratic Party. The GOP was founded in 1854 by opponents of the Kansas–Nebraska Act, which allowed for the potential expansion of chattel slavery into the western territories. The party supported economic reform and classical liberalism while opposing the expansion of slavery