Difference Between Nazism and Fascism

Nazism and Fascism are two faces of the same coin of totalitarianism. Although both Nazism and Fascism reject the ideology of liberalism, democracy and communism, there are some fundamental differences between the two.

Nazism and Fascism have their origin in the 20th century. Fascism and fascists are commonly associated with the rise of Mussolini in Italy while Nazi and Nazism are associated with Hitler in Germany (Weimar Republic).

Both ideologies played a key role in igniting the Second World War which led to an untold amount of destruction and chaos. As of today, both Nazism and Fascism are looked at in an unfavourable light by a vast majority of the world’s population. 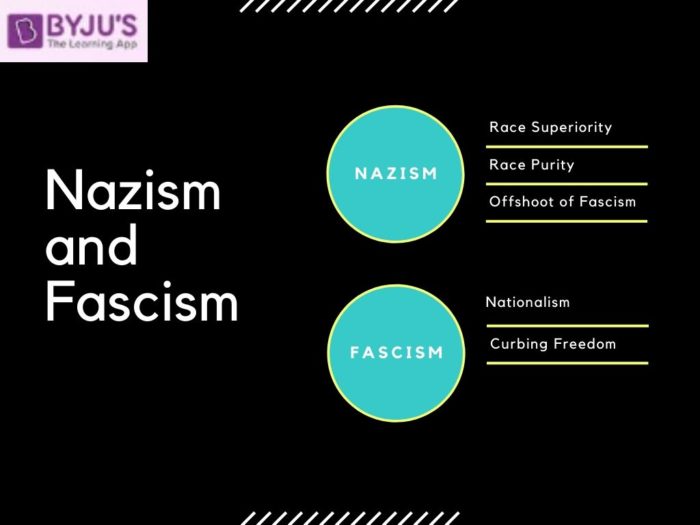 The difference between Nazism and Fascism is given below:

Differences Between Fascism and Nazism

You can find more Difference Between Articles, by visiting the linked page.

Both Fascism and Nazism are regular topics in the UPSC Mains Examination. You can more about additional topics by visiting the UPSC Mains Syllabus page. Moreover, the additional links below will also aid you in your exam preparation.

Frequently Asked Questions on Difference Between Nazism and Fascism

Q 1. What is meant by Fascism?

Ans. Fascism is a form of far-right, authoritarian ultranationalism marked by forcible suppression of opposition, dictatorial power, and strong regimentation of society and economy.

Ans. Nazism emphasised on racism. The doctrine believed in the superiority of a state ruled by a particular race.

You can find more UPSC-Related preparation materials by referring to the links given below in the table: