The terms, economics, economy, economic and economical are inter-related to each other yet have diverging factors between them.

Economics is a social science that deals with the production, distribution, and consumption of goods and services.

*Economics (Indian Economy) is an optional subject in the UPSC Mains Examination.

The term ‘Economy’ is defined as a social domain that stresses the importance of practices, discourses associated with the production, use, and management of resources.

Economical on the other hand means giving a reasonable value to time, money and effort spent.

Aspirants preparing for the upcoming Civil Services Exam can test their preparation through the links given below: 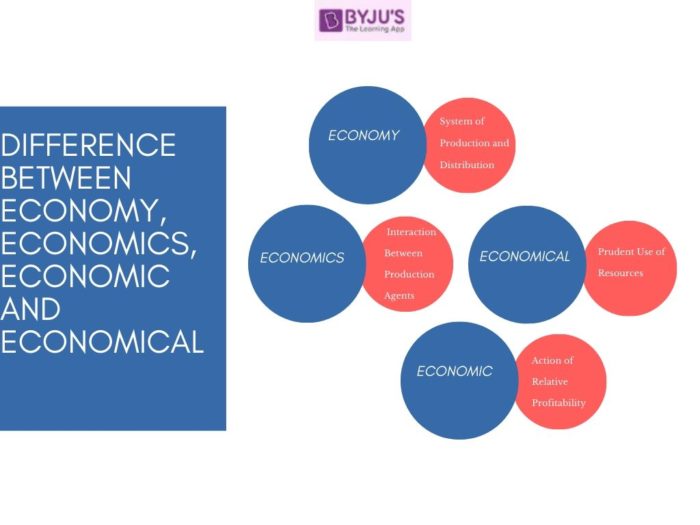 The difference between the four terms will be highlighted in this article, which will be useful in the IAS Exam.

How are Economics, Economy, Economic, and Economical different from each other?

The main differences between Economics, Economy, Economic, and Economical are detailed below:

The word ‘economic’ is used to denote any action or object which is relatively profitable to the party involved. It is also used where there is any form of transaction, monetary, or otherwise is involved. The word first appeared in the late 19th century, initially referring to the practice of household management.

An example of the usage of this term can be as follows:

In terms of economic prowess, India is ahead of a vast majority of the nations of the world.

Candidates can visit the linked article and refer to the Important Economic Terms for UPSC Exam.

An example of how the term is used is highlighted below:

Refer study materials for UPSC Economics (Indian Economy) optional subject through the links given below:

What is the meaning of economy and economics?

The economy is, according to the Oxford Learner’s Dictionary, “the relationship between production, trade and the supply of money in a particular country or region”, so we can say, for example: Economics is a science that studies economies and develops possible models for their functioning

Economics is a social science concerned with the production, distribution, and consumption of goods and services. It studies how individuals, businesses, governments, and nations make choices about how to allocate resources.