Difference between Himalayan and Peninsular Plateau

The difference between Himalayan and Peninsular Plateau is explained here in detail. This topic is important from the perspective of Geography Syllabus. The one major difference between them is that the whole mountain system of Himalaya represents a very youthful topography with high peaks, deep valleys, and fast-flowing rivers whereas the peninsular plateau is composed of igneous and metamorphic rocks with gently rising hills and wide valleys. 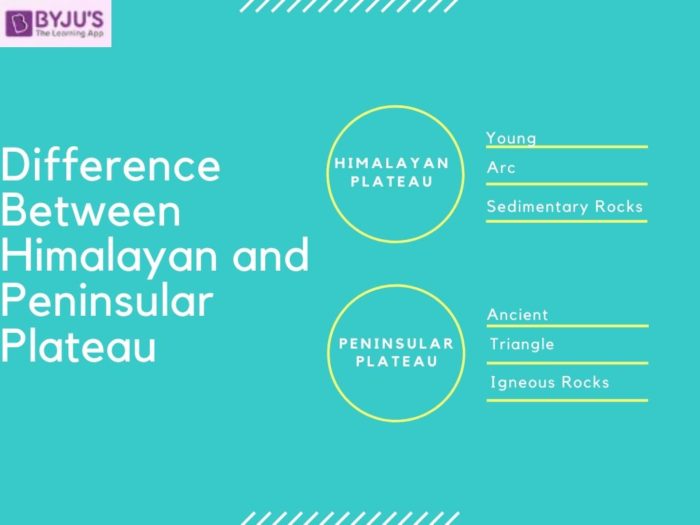 The major differences between Himalayan vs Peninsular Plateau are

These are the main differences between Himalayan and Peninsular Plateau. The differences given in the above table can help the UPSC Civil Service Exam aspirants to answer any related questions easily in the exams.

What is a Peninsular plateau?

The Peninsular plateau is a tableland composed of the old crystalline, igneous and metamorphic rocks. It was formed due to the breaking and drifting of the Gondwana land and thus, making it a part of the oldest landmass. The plateau has broad and shallow valleys and rounded hills.

What is the geographical extent of the Himalayan Plateau?

The Himalayas stretch uninterruptedly for about 1,550 miles (2,500 km) in Asia, forming a barrier between the Plateau of Tibet to the north and the alluvial plains of the Indian subcontinent to the south.