The modern “Atomic Age” is attributed to the age of discovery and developments in the field of nuclear fission. After India’s 3 stage Nuclear Power Program that was conceived soon after Independence to meet the security and energy demands, India commissioned its first Nuclear power plant in Tarapur, Maharashtra. Students preparing for the IAS Exam must be aware of this and topics related to it.

A nuclear reactor, part of the Nuclear Plant is an important concept in Science & Technology which is part of General Studies paper-3 in the UPSC Syllabus. In this article, one can learn about the types and working of nuclear reactors. We have also mentioned topics that can be related to Nuclear Reactors for the UPSC 2022 Exam.

What is a Nuclear Reactor?

A nuclear reactor is the most important part of a nuclear power plant. It is where the nuclear chain reactions occur that produce energy by fission. The heat thus produced can be used to produce electricity. 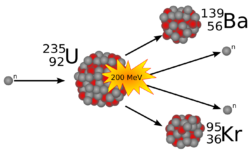 The main purpose of a reactor is to contain and control the energy released. Uranium is used as the nuclear fuel in the reactors.

The heat produced by nuclear reactions is used to convert the water into steam, which is further converted into carbon-free electricity with the help of turbines.

Main Components of a Nuclear Reactor

The main components of a nuclear reactor are listed below.

Based on various components and working principles of Nuclear Reactors, one can distinguish them into the following types discussed below. Even though all the commercial nuclear power reactors use Nuclear Fission, they can be classified into two categories based on the energy of neutrons that sustain the fission chain reaction.

The list of the locations of the installed nuclear reactors in India is given below.

There are about five other projects under construction.

What was the objective behind formulating the Three Stages Nuclear Power Program?

What is Critical Mass?