The sloth bear (Melursus ursinus) is a bear species native to the Indian subcontinent.

Unlike other bear species of the world they mainly feed on fruits, ants and termites. This makes it myrmecophagous, as in feeding mostly on insect species.

This article will give details about the Sloth Bear within the context of the IAS Exam.

Characteristics of the Sloth Bear

The sloth bear has long shaggy fur, a mane around the face and long-sickle shaped claws. In body structure, it is lankier than the brown and Asian black bears. It also shares traits with other insectivorous mammals.

Sloth bears have thick and long muzzles with small jaws and wide nostrils. They have long lower lips which can be stretched over the other edge of their noses, thus allowing suck large numbers of insects.

Sloth bear fur is completely black (rusty for some specimens), save for a whitish Y- or V-shaped mark on the chest.

Their back legs are not very strong, though they are knee-jointed, and allow them to assume almost any position.

Further characteristics of Sloth Bear are given in the table below:

The Sloth Bear has two subspecies:

Indian Sloth Bear (Melursus ursinus ursinus): The bigger, well known and widespread of the subspecies, it is found in areas with forest cover, low hills bordering the outer range of the Himalayas from Punjab to Arunachal Pradesh.

Sri Lankan Sloth Bear: (Melursus ursinus inornatus): The Sri Lankan sloth bear is smaller than the nominate subspecies. It is found in the northern and eastern lowlands of Sri Lanka. 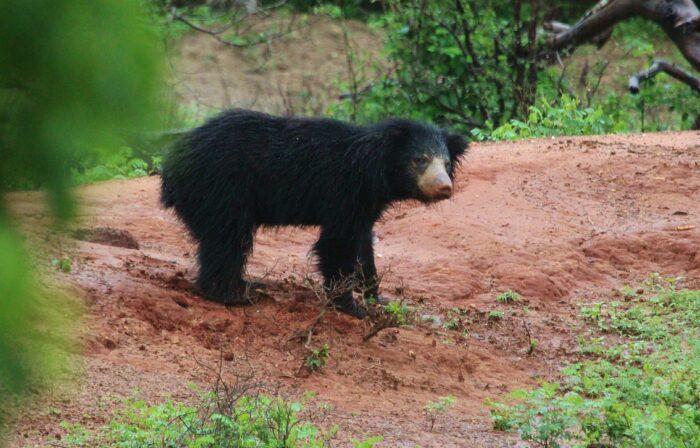 Behaviour and Habitat of the Sloth Bear

Adult sloth bears travel in pairs. They are excellent in climbing trees and running faster than humans. Sloth bear mothers carry their cubs up trees as the primary defense against attacks by predators instead of sending them up trees. The cubs can be threatened by predators such as tigers, leopards, and other bears.

Sloth bears are adept in hunting termites and ants. On finding a termite/ant mound through smell they use their claws to comb their way to the bottom and disperse the soil with violent puffs. The insects then are sucked through the muzzles.

Sloth bears can be found in a wide range of habitats like wet and dry tropical forests, shrublands and grasslands below 1500 m in the Indian subcontinent.

Conservation Status of the Sloth Bear

As per the IUCN Red List, the Sloth bear is listed as vulnerable. No fewer than 20,000 sloth bears survive in the forests of Indian and Sri Lanka. It is listed in Schedule 1 of the  Indian Wildlife Protection Act, 1972.

Sloth bears are one of the aggressives bear species and the large presence of human populations near its reserves have led to many instances of human-bear conflicts.

A prevailing theory suggests that sloth bears see humans as potential predators muscling in on their territory and react by aggressively attacking them similar to how they would respond to Indian leopards or tigers.

In order to mitigate the worse effects of the human-bear conflict the government of India has educated the people about conservation ethics and  reverse habitat destruction – which is the root cause of human-bear conflict – by community-based reforestation programmes.

The population of sloth bears are better protected in high-profile reserves. Major sloth bear sanctuaries in India include the Daroji bear sanctuary, Karnataka.

Find the list of National Parks of India by visiting the linked article.

The government of India has banned use of sloth bears for entertainment, and a ‘Sloth Bear Welfare Project’ in the country has the objective of putting an end to their use for entertainment.

Agra Bear Rescue Facility is where bears rescued from entertainment purposes are rehabilitated and released into reserves.