What is the Tide? [UPSC Geography Notes]

The gravitational pull of the celestial bodies on the Earth and the ocean leads to the formation of tides. It is a fundamental topic in the syllabus of Geography for the IAS Exam. This article will help you know the following:

What is the tide?

Tides can be defined as the alternate rise and fall of the ocean water. It is caused by the combined effects of :

What are the types of tides & what causes these tides?

The table below briefs the types of tides followed by detailed explanations:

A semi-diurnal tidal cycle is the one with two nearly equal high tides and two low tides each day. The interval between the high and the low tides is of around 12 hours and 25 minutes. Semi-Diurnal Tides are most widespread in the Indian Ocean. The other prevalent coasts where semi-diurnal tides are experiences are:

It means four tides in a day. Two tides by the sun and two by the moon. Spring Tide It is an exceptionally high tide generated by the complementary factor played by the Sun with respect to the moon. It should be noted that when Sun, Moon, and Earth are in the same line, the position is known as the Syzygy. This syzygy can be of 2 types :

A tidal cycle with two unequal high and low tides lead to the formation of the mixed tidal cycle, or simply called mixed tide. This tidal cycle has both semi-diurnal and diurnal oscillations. It is widely observed in the Gulf of Mexico and the Caribbean Sea. Southeastern Brazilian coast also witnesses mixed tides. 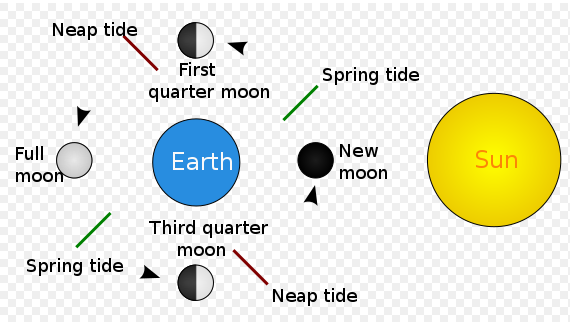 Spring tides are formed when the sun and the moon are in line with each other and pull the ocean surface in the same direction. This leads to higher high tides and lowers low tides and such tide is called a spring tide. In a lunar month, it occurs twice. It is also known by the name of ‘King Tide.’

Note: The aspirants should know that the spring season has nothing to do with spring tides. The word ‘Spring’ in spring tides means ‘springing forth.’ These occur in full or new moon days.  In both new moon or full moon days, the sun’s gravitational pull is added to the moon’s gravitational pull on Earth, causing the oceans to bulge a bit more than usual. This results in ‘higher’ high tides and ‘lower’ low tides.

It occurs seven days after the spring tide. The prominent point is that the sun and the moon are at the right angle to each other. This tide occurs during the first and the last quarter of the moon. The gravitational pull of the moon and the resulting oceanic bulge is cancelled out by the gravitational pull of the sun and its resulting oceanic bulge. Also, in contrast to spring tides, the high tides are ‘lower’ and the low tides are comparatively ‘higher’ in neap tides.

How do tides work?

Tide changes as per the 4 stages given below.

What is a tidal bulge?