An application was filed by the Goa government in the Mahadayi Water Dispute Tribunal in New Delhi seeking action against Karnataka for breach and disobedience of the order of injunction dated April 17, 2014 passed by the tribunal. The State government’s application has been filed under the Interstate River Water Disputes Act, 1956. 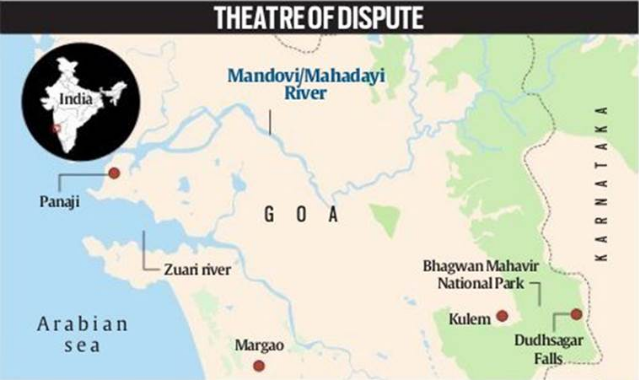 A Special Bench monitoring the CBI investigation into the alleged extrajudicial killings in Manipur will hear a petition filed by 355 Army officers in the Supreme Court, alleging “persecution” by agencies such as the CBI for doing their duty in the insurgency-hit areas of Jammu and Kashmir and the north-eastern States.

What is the dilemma?

Keeping in view the intensity and magnitude of the floods in Kerala, the Government of India has declared this a calamity of a ‘severe nature’. The Rajya Sabha Chairman and Lok Sabha Speaker urged Members of Parliament to generously contribute from their MPLADS funds for relief and rehabilitation works in flood-affected Kerala besides considering donating a month’s salary.

Major political parties and the Hurriyat in Jammu and Kashmir expressed support for a Kashmir-centric dialogue between India and Pakistan, welcoming the intent for “constructive engagement” expressed by the former and “uninterrupted dialogue” by the latter.

Prime Minister Narendra Modi in a letter to his newly sworn-in Pakistani counterpart Imran Khan has called for constructive engagement with Pakistan expressing India’s commitment to build good neighbourly relations between India and Pakistan and pursue meaningful and constructive engagement for the benefit of the people of the region. India’s call for engagement comes in the backdrop of recent Indian insistence that Delhi will hold talks only if Pakistan acts against terror suspects and outfits.

Mr. Qureshi, in his first remarks after taking charge, said he would remove the trust deficit with neighbours and try to build new bridges.

1. NDRF aid only for severe calamities

The Union government has declared the Kerala floods a “calamity of severe nature”.

What are the classifications of disasters, and how does this affect funding?

How are the NDRF and the SDRFs funded?

How have NDRF funds been allocated to States in the recent past?

In 2017-18, up to December 27, 2017, the Union government released NDRF funds to nine States — Arunachal Pradesh, Bihar, Himachal Pradesh, Karnataka, Kerala, Nagaland, Rajasthan, Tamil Nadu, and Telangana — over and above its contributions to their respective SDRFs. The recipient of the highest amount was Karnataka, which got Rs. 913 crore that year.

In October 2017, RBI had set up a high-level task force (HTF) chaired by Y.M. Deosthalee to review the availability of information on credit and assess the gaps. The HTF submitted its report on April 4, 2018, recommending that a PCR should be set up by the RBI in a phased and modular manner.

Negotiations on the Regional Comprehensive Economic Partnership (RCEP), among 16 Asian and Pacific Ocean countries, have entered a decisive phase.

India is among the countries that will have to take a call at this point.

The government has decided to set up a group of four ministers to advise the Prime Minister on the path ahead. This indicates the seriousness of the situation.

India should carefully weigh the pros and cons of exiting the trade bloc. It should seriously consider the impact of any exit from RCEP on its links to global supply chains. The East Asian Tigers were, like India, remarkably protectionist economies, but they opened up at the right time, and at the right pace. India could still learn a few lessons, given its botched experience in industrial development. Multilateralism, fairness and WTO principles must be believed in but these must not hit the Indian Industries.

What is Swachh Bharat Abhiyan?

The Swachh Bharat Abhiyan, also known as the Clean India Mission started by the Indian government under PM Narendra Modi is a national-level campaign dedicated to cleaning the country. The event was flagged on 2 October 2014. The formal launch was at Rajghat, New Delhi in honour of Mahatma Gandhi’s memory. It involves the cleaning of roads, streets and infrastructure. The mission is the biggest cleanliness drive India has ever seen.

What does Swachh Bharat Mission lack?

Any tangible achievement of a clean India is possible only if the stigma attached to sanitary labour, place and waste are critically addressed by caste-neutralising these professions and through adoption of technologies. Until then we are unlikely to succeed in any mission to keep our cities clean. Even if we succeed in putting up a façade of cleanliness, we need to remember that a clean village exists because an ‘unclean’ caste has absorbed all the ‘filth’ of the village.

Integrated Tribal Development Agency (ITDA), Parvatipuram, Andhra Pradesh for the first time has introduced free meal facility for the tribal people, who come to ITDA office, for the submission of petitions to senior officials on every Monday.

It was announced by the Ambassador of Maldives to India that The Government of Maldives will donate $50,000 (roughly Rs. 35 lakh) towards flood relief in Kerala. India being its closest neighbour, it said that any natural disaster or calamity that strikes our neighbour has an emotional impact on Maldives. It was also told that the donation is a small gesture to a neighbour and friend who has always stood by Maldives in need.

The Supreme Court, gave Rajiv Gandhi assassination convict A.G. Perarivalan a fortnight’s time to place on record a copy of his application made to the Tamil Nadu Governor two years ago seeking grant of pardon. The Supreme Court had confirmed his death sentence in 1998 on a death reference. His death penalty was commuted to life sentence by the court in 2014. Now, Perarivalan has spent over 26 years in prison.

In a court hearing that coincided with the 74th birth anniversary of the late leader Rajiv Gandhi, Perarivalan submitted that his mercy petition was pending since December 30, 2015. In his letter to the Governor, he had written how he had already undergone 24 years of solitary confinement, while life imprisonment is for a maximum of 20 years after which the convict could be considered for release.

American lawmaker Carolyn Maloney said that she would introduce a legislation to posthumously award Mahatma Gandhi a Congressional Gold Medal, the highest civilian award in the U.S., for inspiring peaceful movements for civil rights around the world.

In 2016, she had led the successful effort to create the Deepavali Stamp, which she says has since become one of the highest selling stamps.

It is described as the lifeline of Goa.

Funds released under the scheme are non-lapsable.

The State Disaster Response Fund corpus is contributed by the Union government and the respective State governments in a 75:25 ratio for general category States and 90:10 ratio for the Special Category States. As per the DM Act 2005 guidelines, there is no such provision for a disaster to be given more importance or urgency in relief only if it is declared as a national disaster. Any calamity which is termed to be of “severe nature” or a “rare severity” will get adequate financial support and assistance from rescue forces such as the NDRF.

River waters use/harnessing is included in states jurisdiction. However, union government can make laws on regulation and development of inter-State rivers and river valleys when expedient in the public. When the public interest is served, President may also establish an interstate council as per Article 263 to inquire and recommend the dispute that has arisen between the states of India.