Police Reforms against Custodial Violence in India is always a point of debate whenever any issue concerning the same makes the headlines or otherwise too. Read about Police Reforms in India in the linked article.

In 2020, the Supreme Court asked the Government’s response pertaining to the implementation of Section 176(1A) of the CrPc, which calls for mandatory judicial inquiry related to incidents of deaths, disappearance, rape, etc. in judicial custody.

Discussed further below in this article are the causes, cases and laws for custodial violence in India. IAS Exam aspirants must refer to the information given further below as questions based on the same may be asked in the upcoming Civil Services Exam under the General Studies-2 paper or is related to GS 4 case studies.

Any case of custodial violence is reported to the National Human Rights Commission in India. To know more about the objectives, significance and roles of NHRC, candidates can visit the linked article.

There are different types of custodial violence. Discussed below are the same:

Custodial Violence in India has been a major human rights issue for decades now. It is one of the root obstacles to democracy and the development of human well being. According to National Crime Records Bureau (NCRB) data, between 2001 and 2018, only 26 policemen were convicted of custodial violence despite 1,727 such deaths being recorded in India.

Given below is the data released by the National Human Resources Commission for the month of April 2021 in regard to the complaints registered for custodial violence:

The International Human Rights Day on 10th December annually marks the occasion of the signing of the Universal Declaration of Human Rights in 1948. Candidates can read in detail about the significance of this day at the linked article.

Statistics on Custodial and Judicial Violence in India 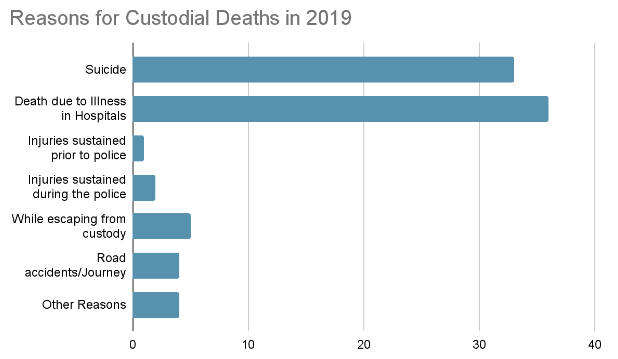 The following provisions were enacted to curb the tendency of policemen to resort to torture to extract confessions, etc.:

Other important constitutional provisions are as follows:

To know more about the other Important Articles of the Indian Constitution, candidates can visit the linked article.

Causes of Custodial Violence in India

There are multiple reasons which have led to the increased cases of custodial and judicial violence in the country. A few of the most common causes have been discussed below:

Limited time for interrogation, pressure from higher authorities and long working hours are few other reasons for custodial violence in the country.

What is custodial violence?

What is the reason behind custodial violence in India?

Reason behind custodial violence is as follows:

IAS Exam aspirants can get updated with the latest UPSC Syllabus for the prelims and mains examination at the linked article and start their preparation accordingly.

For the latest exam updates and study material, turn to BYJU’S for assistance.