Difference Between Country and Nation

The terms ‘Country’ and ‘Nation’ are often used interchangeably, that they are thought of as different words having the same meaning. But there are major differences between the two.

A nation is a community of people formed on the basis of a common language, territory, ethnicity etc.

A country may be an independent sovereign state or part of a larger state, a physical territory with a government, or a geographic region associated with sets of previously independent or differently associated people. 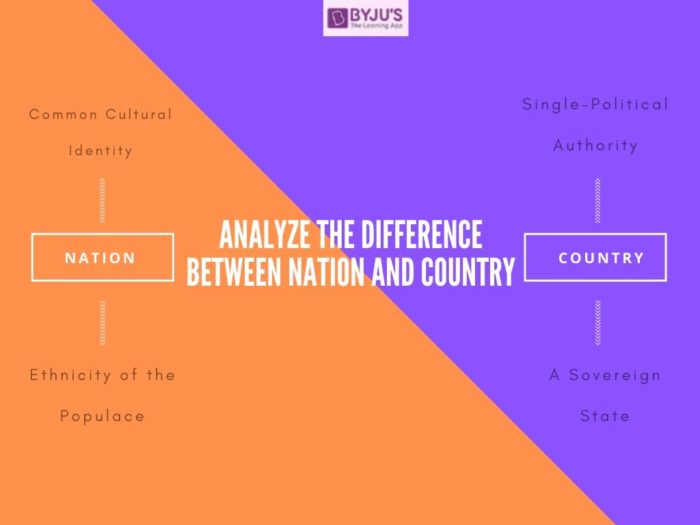 This article will highlight the major differences between Country and Nation within the context of the IAS Exam.

One may read about the important difference between the articles linked below:

Differences between Nation and Country

Nation and Country are recurring terms under the Geography and Polity segment of the IAS Exam. Aspirants can find study materials for the segments through the links given below

Become familiar with the general pattern of the IAS Exam by visiting the IAS Syllabus page. For more preparation materials they can refer to the links given in the table below:

What country is an example of a nation?

Places like France, Egypt, Germany, and Japan are excellent examples of nation-states. There are some States which have two nations, such as Canada and Belgium. Even with its multicultural society, the United States is also referred to as a nation-state because of the shared American “culture.

What is an example of a nation?

The definition of a nation is a body of people in a particular location with a distinct government. An example of nation is the United States. The Roma are a nation without a country. The Kurdish people constitute a nation in the Middle East.