The Iranian Government has decided to proceed with the construction of the Chabahar rail project on its own, citing delays from the Indian side in funding and starting the project. 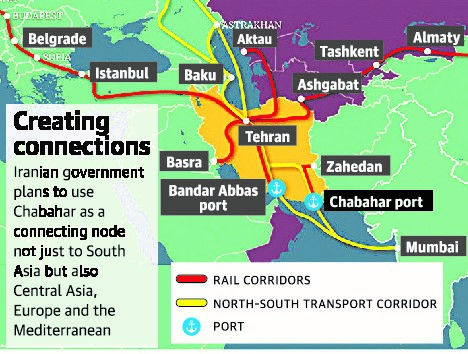 Why was there a delay?

India’s Side – On 16th July 2020, the Ministry of External Affairs spokesperson made a statement that there has been significant progress on the port project and also Government has denied the reports of Iran dropping India and cleared that India is no longer involved in the Farzad-B gas field project where Oil and Natural Gas Corporation had originally signed an agreement for exploration in 2002. Also, the ministry mentioned that Tehran is yet to nominate an authorized entity to finalise the outstanding technical and financial issues related to the venture.

The Chabahar port is located in the Sistan-Baluchestan province on Iran’s south-eastern coast.

Read more about the strategic importance of the development of Chabahar Port to India covered in the 8th July 2019 Comprehensive News Analysis.

Iran and China are close to finalising a 25-year Strategic Partnership deal worth $400 billion.

This topic has been covered in the 13th July 2020 Comprehensive News Analysis. Click here to read.

The Supreme Court has held that the erstwhile Travancore royal family is the “human ministrant” or the shebait (manager) of the properties belonging to Sree Padmanabha, the chief deity of Sree Padmanabhaswamy temple in Kerala.

The Expert Appraisal Committee of the Environment Ministry has recommended the grant of Environmental Clearance for the development of an economic corridor between Tamil Nadu and Karnataka.

1. Enabling people to govern themselves

Arguments in favour of decentralization:

Steps to be taken:

1. Aircraft carriers to get Indian jets by 2032

The Navy is expected to start receiving new twin-engine aircraft carrier-based fighter aircraft being developed by the Defence Research and Development Organisation (DRDO) by 2032 and it will be a replacement for the Russian MiG-29K carrier jets in service.

Pakistan will allow Afghanistan to send goods to India via the Wagah border.

Technology giant Google will invest $10 billion (₹75,000 crore) in India over the next five to seven years with a focus on digitising the economy and building India-first products and services.